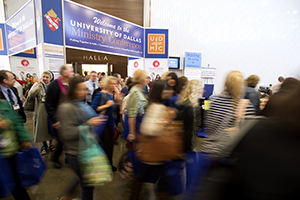 The ninth annual University of Dallas Ministry Conference (UDMC), set for Oct. 22-24, will move to the Kay Bailey Hutchison Convention Center Dallas this year to accommodate its growing attendance. The conference, which is the second largest of its kind in the United States, is sponsored by the Catholic Diocese of Dallas and the University of Dallas. Last year, more than 5,200 participants from 31 states and seven countries attended.

The tremendous growth of the conference in just eight years is proof that people around the country need and want ongoing formation of this caliber, said Bishop Kevin Farrell of the Diocese of Dallas. To accommodate the growing attendance and allow us to expand even more, we are moving the conference to a larger venue for 2015.

The University of Dallas Ministry Conference is a powerful opportunity for Catholics to grow in faith together through prayer, fellowship and education, said University of Dallas President Thomas W. Keefe. I encourage everyone who is able to attend to consider doing so.

For the last three years, the UDMC was held at the Irving Convention Center.

Additionally, the UDMC will showcase more than 100 exhibitors, including publishing companies, Christian gift stores and nonprofit organizations. A liturgical art display, musical performances by well-known and up-and-coming Catholic artists, a conference Mass and prayer services will round out the conference.

Tickets for the three-day event will go on sale in May.