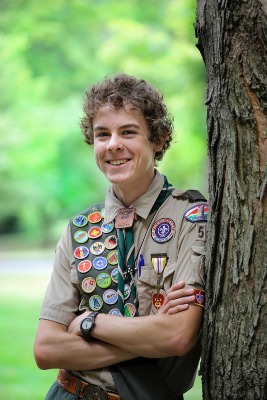 New member of the UD Class of 2019 and aspiring philosophy major Thomas Hogan is, in true UD fashion, considering a concentration in either classics or mathematics. He visited UD during Odyssey Days last year and approved of his discovery that the Classics Department focuses on classical languages rather than classical literature -- because the entire undergraduate curriculum revolves around studying the literature.

A graduate of the all-male Jesuit school St. Louis University High (SLUH), Hogan learned about UD from various family friends, some of whom are current students or alumni of UD, including Joe Archer, BA '17, with whom he ran cross country.

Speaking of running, Hogan recounted how it became a tradition of sorts for him to recite the band of brothers speech from Shakespeare's "Henry V" prior to meets; this recitation seemed to bestow good luck upon the team. Hogan had become familiar with the speech back in seventh grade during his homeschool years, but his skills in poetry recitation were honed during his participation in Poetry Out Loud, a national poetry recitation contest. His other high school activities included taking part in SLUH's spring musicals.

Additionally, Hogan is a Boy Scout and spent this past summer as a Philmont Ranger at Philmont Scout Ranch in northeastern New Mexico. Philmont is the Boy Scouts of America's original High Adventure base, at which young people can experience various backpacking and horseback riding excursions as well as participate in training and service programs. As a Ranger, Hogan served as a guide to Philmont participants both as they prepared for the trail and for the first leg of their treks.

At UD, Hogan will take at least a year off from running while he settles into college and campus life. He plans to be involved in Campus Ministry and might also audition for a musical if the Music and Drama Departments decide to collaborate on another one soon. Otherwise, as far as extracurriculars, he will just see what comes up.

After college, Hogan intends to return home to St. Louis and enter the seminary for the archdiocese there.

"I've been discerning for a long time," Hogan says. "I will probably just stay in my home diocese."

This oldest of six children (four boys, two girls) is looking forward to growing socially, becoming more comfortable with meeting and talking to new people. He is also excited to be part of a learning community.

"My favorite high school classes were AP English and Latin, because of the thoughtfulness of my teachers and fellow students and the quality of our discussions," he said. "I know I'll find both here at UD."