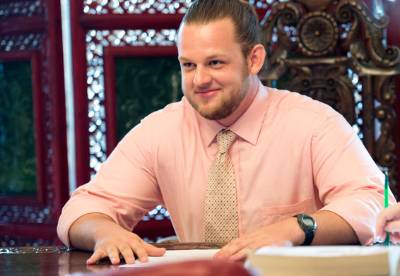 After completing his undergraduate studies at St. John’s College in Santa Fe, Rhett Forman, PhD ’17, worked in a political think tank in Raleigh, North Carolina, for a year before deciding politics probably wasn’t the route he wanted to pursue. He still applied for some political science graduate programs but expected literature would more likely be his choice. Three years later, he’s working toward a doctorate in literature through the Braniff Graduate School of Liberal Arts’ Institute of Philosophic Studies.

“I applied to many graduate programs and even considered applying to a few in creative writing,” Forman said. “But I ended up at UD because I couldn’t imagine being anywhere else studying literature.”

He hasn’t abandoned politics altogether, though; in fact, he was elected president of the Braniff Graduate Student Association (BGSA) this spring, so he will serve through the 2015-16 academic year.

“I got involved because I thought the BGSA to be very necessary,” Forman said.

During his tenure, he will persist in promoting what have been the BGSA’s top three priorities: to support graduate students who attend conferences; to fund Ramify, Braniff’s literary and scholarly journal; and to voice and help address the concerns of the Braniff student body. Additionally, the BGSA  has added three other components: the Braniff Conference in Liberal Arts, which will be held for the second year in January 2016; a professional development committee, which will host workshops and aid students in applying and preparing for conference presentations; and a social events committee, which will promote and sponsor activities to bolster Braniff’s sense of community.

“The efforts of the BGSA to promote the professional development of the graduate students complements the efforts of both the dean's office and the individual departments,” Forman explained.

Forman’s largest project currently as BGSA’s president is the conference, which will be held Jan. 29-30. This year’s theme is philosophy and poetry, and Ron Smith, the poet laureate of Virginia, will be the keynote speaker. Graduate students from all over the U.S., as well as from Italy and France, have already expressed interest in presenting at the conference.

Forman’s academic interests center in poetry -- both the writing and the studying of -- and he has a particular affinity for Ezra Pound. His introduction to Pound occurred in high school at the Kentucky Governor’s School for the Arts. Shortly thereafter, he learned about the Ezra Pound Center for Literature in northern Italy, which he was finally able to attend in the summer of 2014. Located at Brunnenburg Castle (the home of Pound’s daughter, Mary de Rachewiltz, and her family), the center is run by the University of New Orleans and research professor John Gery as a facet of the Division of International Education. Students take two courses, one on poetry/creative writing and one on Pound’s work. Forman received credit at UD for these courses.

“Going to the Ezra Pound Center for Literature was the culmination of many years of time and effort,” Forman said.

This past July, Forman attended the Ezra Pound International Conference (EPIC), also held at Brunnenburg. He performed some of his own poetry and presented an academic paper he had written for Professor of Psychology Robert Kugelmann and Professor of English Scott Dupree's History of Modern Psychology and Modern Poetry class at UD. As a result of attending and presenting at EPIC, he now contributes poetry to and writes book reviews for the Ezra Pound Society magazine, Make It New.

When he’s not studying and writing poetry, Forman is a competitive amateur powerlifter and helps to strength train the UD women’s soccer team. Once he completes his doctorate at UD, he may pursue an M.F.A. in creative writing. Ultimately, he wants to teach, preferably at a small liberal arts college.