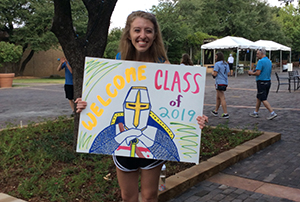 The university's record-breaking freshman class of approximately 400 students moved in Friday, Aug. 21. Orientation leaders greeted the students with handmade signs and passed out popsicles as the relatively mild (for Dallas in August) summer day heated up. Undergraduate classes for the 2015-16 school year start Wednesday, Aug. 26.

The members of the Class of 2019 hail from 43 states, 270 cities and seven countries, with 7,946 miles from Faisalbad, Pakistan, being the farthest a new student will travel to get to the UD campus in Irving.

According to the Office of Student Affairs, move-in day began smoothly, with families arriving at a steady pace that allowed individual attention from the team of more than 50 orientation leaders and admission counselors -- as well as President Thomas W. Keefe -- on hand to greet and help them.

"My advice for the freshman is to be involved. The more involved you are the easier it makes the transition to the school," said Stephen Thie, BA '16, an orientation leader coordinator.

With 56 percent of freshman from outside of Texas, the Class of 2019 is 75 percent Catholic and boasts 15 National Merit Finalists, so they should fit right in here at UD.