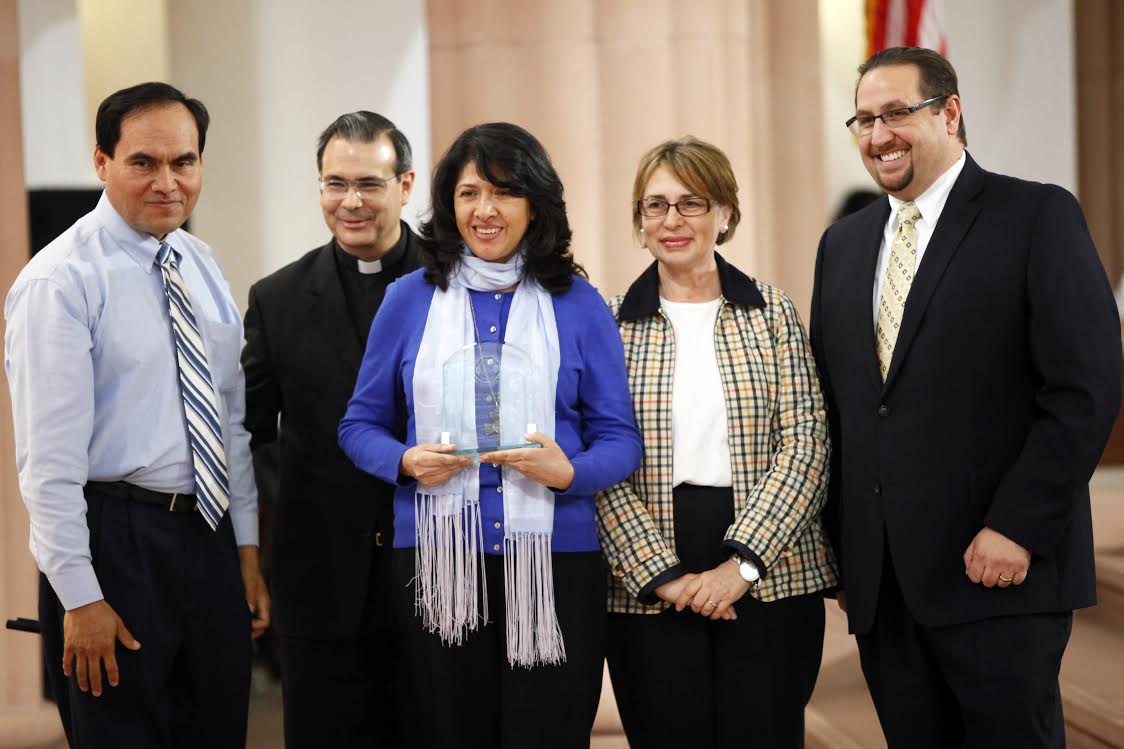 The UD School of Ministry will recognize two alumni for their exemplary service to the local church through faith formation and ministry to the needy this month. Cecilia Rangel, a graduate of the four-year continuing education Catholic Biblical School program, will be honored with the Dei Verbum Award, and Kevin Harrington, who earned a master of theological studies in 1995, will receive the Lumen Gentium Award. Rangel (at right, in blue) was honored on Jan. 25 at 2 p.m. at St. Ann Catholic Parish in Coppell, Texas. Harrington was honored Jan. 18 at 11 a.m at St. Thomas Aquinas Catholic Church in Pilot Point, Texas.

Our distinguished alumni live out the School of Ministry's mission to educate and form ministers able to share the ancient traditions of the Catholic faith with 21st century people, said Dean Theodore Whapham.

Harrington's formative experiences as a campus ministry leader in college launched a lifetime of service to the church. As an active parishioner at St. Thomas Aquinas Catholic Church, Harrington has been a catechist of adults and youth, served as a pastoral council member and contributed professional expertise in administrative areas. He is also a decades-long supporter of retreat ministry through the Catholic Renewal Center of North Texas and Montserrat Jesuit Retreat Center, where he has done everything from maintenance to IT consultation, directed private and group retreats, and served on the boards of directors. Additionally, Harrington has conducted retreats for those incarcerated in the Texas penal system. Harrington has a long and distinguished career as an information technology executive with Oracle.

Rangel graduated with the first class from the Escuela Biblica Catolica, the Spanish language Catholic Biblical School program, at the University of Dallas in 2010. A longtime Eucharistic minister, she also created a formation program for Eucharistic ministers and altar servers in her parish, which she still runs. In 2011, with other University of Dallas Escuela Biblica Catolica alumni, she founded weekly Spanish Bible classes at St. Ann Catholic Parish, with a current average attendance of 60 people. Rangel has also participated as a volunteer in the fundraising efforts of the Guadalupe Radio Network and, most recently, as a radio speaker. She works at St. Ann as an administrative assistant to the Adult Religious Education Department. Rangel and her husband, Raul, have been married for eight years.