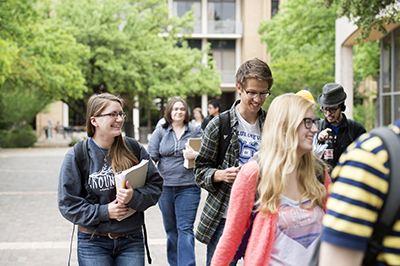 U.S. News & World Reports 2016 rankings of the nations best colleges are out and the University of Dallas is the highest ranked Catholic Best Value School in Texas. The Best Value ranking takes into account both the academic quality of the institution and the average amount of need-based aid provided to students.

"We are pleased and honored to once again be identified as one of the country's top universities. To be acknowledged as the best value among Catholic schools in Texas is truly a testament to our strong academics and efforts to provide need-based aid to make a quality private education more accessible," said University of Dallas President Thomas W. Keefe.

"I think the number one reason UD is so well-valued is because the academics are so strong and they're just beginning to be recognized for what they've been for years," said Elisa Cipollone, a 2015 history graduate who works as a staff writer and media producer at Lifezette.com. "Now that I'm out in the work force with a job as a writer, I've come to understand and appreciate what UD has given me."

Since July, the University of Dallas has received multiple prestigious distinctions, including being named one of the country's best institutions for undergraduate education by The Princeton Review and one of Americas Best Colleges by Forbes.

Over the past two decades, the U.S. News & World Report college rankings, which groups schools based on categories created by the Carnegie Foundation for the Advancement of Teaching, has grown to be the one of the most comprehensive research tools for students and parents considering higher education opportunities. For a complete list of rankings and more information on the Best Colleges Ranking methodology, visit  www.usnews.com/colleges.