2016 Aquinas Lecture: Aquinas, Aristotle and Beyond 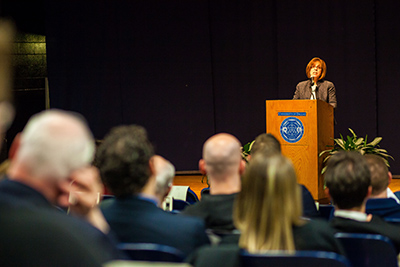 It was a full house in Lynch Auditorium on Jan. 28 for the 2016 Aquinas Lecture, delivered by alumna Eileen Sweeney, Ph.D., BA ’79.

“The ecstatic passages both stretch desire beyond the limited objects of the world and underline the pleasure of joy and delight in God,” Sweeney said in her lecture titled “Aquinas as Ecstatic Aristotelian: Literary Reflections on the Summa theologiae.”

“Offering a counterweight to the passages on the positive picture of the passions as natural responses to natural desires in a way that is both very world-affirming and almost clinical in its analysis,” she went on, “Scripture is also the voice which reminds the reader, lest he or she become too comfortable with the nature ... that ‘blessed are those who mourn,’ ‘the heart of the wise is where there is mourning,’ and ‘it is better to go to the house of mourning than to the house of feasting.’”

She explained that the passages on the place of sorrow and fear are also reminders of the disappointments of both the world and our separation from God.

Sweeney discussed Aristotle’s lack of imagination -- how this was perhaps where he was limited and where Aquinas was able to move beyond Aristotle’s conclusions.

“As my own teacher Louis Mackey often said, the problem of religious belief isn’t so much one of will or even of reason, but of imagination, how open we are to other possibilities, other worlds,” she said.

Aquinas, then, took both Aristotle and Scripture to create “a weaving together of sources into a complex orchestral harmony,” concluded Sweeney.

“Professor Sweeney’s ecstatic analysis of Thomas’s ecstatic Aristotelianism not only points to the reality of achievement of Christian philosophy, but also, it helps to shed light on perhaps the most controverted issue in theology since the end of the Second World War: the question of whether or not man has a natural desire for the vision of God,” said Father James Lehrberger, O. Cist., associate professor of philosophy, in his response to Sweeney. “Dr. Sweeney’s recovery of a forgotten literary dimension of St. Thomas not only adds to our understanding of Aquinas, but it is pregnant with future possibilities in philosophy and theology. I see her paper as being the seed of a possible book.”

According to Sweeney, “We understand starting from the world we’re surrounded in; we hardly think of St. Thomas as a champion of the imagination, but there’s something he’s trying to get us to see.”

The lecture was one of the final events to be held in Lynch, scheduled for demolition this spring to make way for a new administration and student services building.