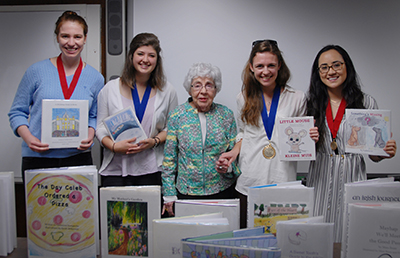 Education Department Professor Emeritus Cherie Clodfelter, Ph.D., who retired from UD in 2007 (continuing to teach occasionally until 2010) returns to campus a couple of times a year. One of these times is for the annual Clodecott Awards for the best children’s book written by a student in the Children and Young Adult Literature course.

The Education Department media room was packed for the event on Thursday, April 14. The students whose books were contenders for the award sat at the two center tables with Clodfelter herself; around the perimeter of the room gathered Education Department faculty and faculty from other departments at the university, Constantin College Associate Dean Scott Crider and Dean Jonathan Sanford, as well as reporters from the Dallas Morning News and the Irving Rambler.

Clodfelter explained the history of the award: one year, in the course evaluation for Children and Young Adult Literature, a student suggested that Clodfelter create an award because of the hours of work the students put into these books. The student suggested that it be called the “Clodecott Award” as a combination of Clodfelter’s name and the American Library Association’s Caldecott Medal, which is awarded annually to the artist of the most distinguished American picture book for children.

Clodfelter, who knows very well the amount of time and effort that goes into these books, liked the idea.

“One of the reasons I had the students write the books was because I wanted them to understand that you can’t be creative in half an hour,” Clodfelter explained. “So often, I’ve heard teachers tell children, ‘Okay, go. Be creative for half an hour.’ But it doesn’t work like that.”

The awards are given for the previous calendar year, so the 2016 Clodecott Awards go to students who were in the Children and Young Adult Literature class in spring 2015 and fall 2015.

Clodfelter began with the 2016 Clodecott Honor Award winners, saying a few words about what she appreciated about each book. There were five honor books:

Normally there is just one Clodecott medal awarded per year, but this year had two: a young adult book and a picture book.

“They were both such perfect examples of their genre,” said Clodfelter.

Lisa Saman’s “Little Mouse” got the medal for the picture book; it was illustrated by her brother, Jonas Saman.

“It’s dedicated to my mom, and the title is because ‘Little Mouse’ is what she calls me,” said Saman, who grew up in Belgium and Dubai. “It’s also a story about winter, because I’ve always loved winter.”

Her mom had actually come all the way from their home in Dubai for a visit and was present at the ceremony to hear Saman read her book out loud to the group. Saman read the English version, but the words are also in Flemish/Dutch so that her whole family can also read it.

The young adult winner, “Matty’s Accidental Adventure” by Mary Grace Quinlan (illustrated by Maddie Pelletier), features a main character, “Matty,” based on Quinlan’s younger brother Matt; the book is dedicated to Quinlan’s family. Matty travels to six planets, each of which represents one of the seven children in the Quinlan family (Matty is the seventh). The moon, also a place Matty visits, is their grandfather, who passed away last year. Their grandmother is the friendly little alien who helps guide Matty on his journey.

“I wanted to write something about the constellations, stars and planets, because they’re my favorite thing in the world,” Quinlan said.

Each student keeps a copy of his or her book, and a copy is also kept in the Education Department’s Cherie A. Clodfelter Children’s Literature Library.

In the photo (L to R): Christina Norton, Mary Grace Quinlan, Cherie Clodfelter, Lisa Saman, Madeline Oi (The other winners either graduated in 2015 or are currently in Rome.)