A Life Devoted to the 'Big Questions' 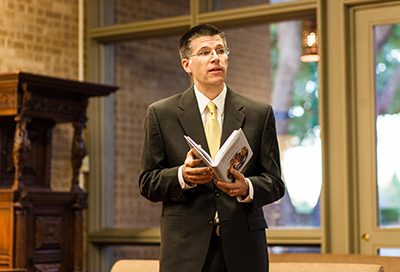 Long before he came to teach here, UD had been on Chad Engelland’s horizon. According to Engelland, assistant professor and director of the master’s program in philosophy, the level of education and the special approach the university takes to his area of expertise had a significant impact on his decision to join UD’s faculty.

Knowing there was “a kind of symbiosis” between the philosophical approaches of UD (which also happens to be his sister’s alma mater) and The Catholic University of America, where Engelland earned his doctorate and studied phenomenology and the history of philosophy, he was even further compelled to become a Crusader, and when a position opened at the university in 2014, Engelland jumped at the opportunity. Prior to his appointment at UD, Engelland taught philosophy at Borromeo Seminary and John Carroll University in Cleveland, Ohio, for nine years.

He recently published his newest book, “The Way of Philosophy: An Introduction,” which Engelland calls his attempt to show people the same path in life and faith that he was fortunate enough to stumble upon.

“First, I discovered contemporary philosophy, which helped me to see how a meaningful human life is not discredited by modern natural science. Second, I met peers who took reason seriously,” said Engelland. “Also, I met people who took faith seriously. Finally, I was made to see that modern intellectual life has not undermined the specifically Christian claim about the divine; on the contrary, there is a profound harmony of faith and reason.”

"In this masterfully conceived and beautifully—and humorously!—written lure to philosophy, Dr. Chad Engelland brings immense learning down to earth in a way that convinces you that good thinking makes all the difference in living a good and enriched life."

Engelland’s decision to come to UD has never wavered. Below, he discusses what drew him to UD, how he found his path, and some of his personal thoughts about life’s big questions.

A: The stars sort of aligned. For a long time I’ve been attracted to UD simply because of the kind of approach it takes to philosophy. It takes seriously the history not for its own sake, but as a way of clarifying the fundamental questions and coming to terms with the structure of reality and the nature of human good.

Q: How have you found the students of Braniff?

A: I’ve been happy to see liberal education lay itself out in the quality of the graduate student here. They bring a lot to the table. Because they come at things from different angles, they tend to bring a more comprehensive approach to philosophical questions. Rather than seeing them as isolated problems to work on and puzzle over, they see it as part of a larger program of seeking wisdom. I anticipated that the students would be like that, but it is delightful to see that in effect.

Q: Augustine’s “Confessions” is one text you teach; some would argue that it’s more biographical or theological than philosophical. How would you respond to that? How should students view this text?

A: We’re not narrow specialists here. We take a very expansive view of what counts as philosophy. We’re really in touch with the classical roots with its orientation to wisdom, and also a sense in which philosophy is not merely an academic discipline. It’s fundamentally the way of living the thoughtful, engaged and principled life. Our students believe it; our faculty believe it. We are all seeking an engaged, principled life. I encourage students to pursue those questions that are written deepest into their hearts and not to allow themselves to get lost in side questions. Pursue those things resolutely.

Q: Let’s backtrack a little bit. What drew you to philosophy?

A: My attraction to philosophy initially was the big questions. What does it mean to be? And, related to that: what does it mean to be human? I was motivated because the view we got from contemporary culture seemed to be a kind of bleak one, cobbled together. It doesn’t account for philosophy nor the other factors that make up the transcendent human experience.

Q: And you tackle these big questions in your writing.

A: I have a book coming out in January on Husserl and Heidegger, called “Heidegger’s Shadow,” with Routledge Press. I also have a book out with The MIT Press called “Ostention: Word Learning and the Embodied Mind.”

“Ostention” was a way of getting at those big questions in a way to be accessible to a wider contemporary philosophical audience. The Heidegger book likewise tries to cope with the challenge of contemporary naturalism and to show that there’s something it cannot account for, namely the human openness to truth. Philosophy has the resources to give an account to that openness to truth.

"Most books of this sort begin with terms and principles, but Dr. Englland's book, like all good philosophy, begins with wonder. "The Way of Philosophy" reminds me to be in awe of reality. It has rekindled in me a love for the study of philosophy. I think all UD students, whether they are majoring in philosophy, physics, or business can learn valuable lessons from this book.

Q: Where else, aside from your writing, do you find this openness to truth?

A: Oftentimes in a graduate school, students have arrived with this narrow interest, and they’re already pursuing this specialized line of inquiry. But our students are more attuned with these fundamental questions of the human heart; that’s why they’re here. They are asking these questions, and the faculty take these questions seriously.

Q: One of the core classes in the Institute of Philosophic Studies covers Nietzsche. What do you make of his criticism of the modern world, namely that it divides life into work and entertainment?

Q: Do you think that a liberal education is an answer to the shortcomings of modern life?

A: One of the crucial things we can do is testify to and witness to the legitimacy of a classical conception that the human being is not made merely to be a function of the economic machine, nor, at the end of the day, to be entertained. There is some transcendent dimension to the human spirit that’s not going to be filled really through work and pleasure. Braniff offers students the possibility of developing that dimension, that thirst for the true, the good and the beautiful that’s really deepest in the heart of the human being.

You can purchase “The Way of Philosophy: An Introduction" on Amazon or Wipf and Stock Publishers.