A Man to Whom Much Credit is Due 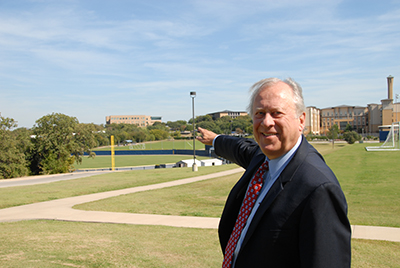 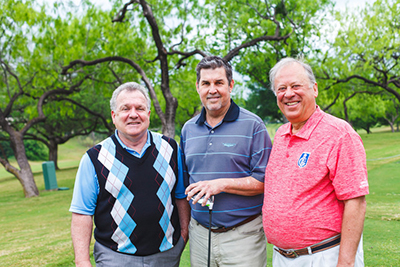 “The view of campus from the west side is so different,” said former Executive Vice President and current Senior Adviser to the President Robert M. “Bob” Galecke, motioning downhill toward SB Hall. “This view has a whole different touch and feel for first impressions.”

Galecke has always been about first impressions, and whenever he would give tours of campus to guests in recent years, he would make sure to bring them up this same hill so they could witness the enhanced perspective of the University of Dallas as seen from this particular angle — SB Hall, the newest residence hall, Clark Hall, and four different athletic fields along with the rest of the university — a vision finally realized through two decades’ worth of work.

But now, after these two decades of service to our esteemed Catholic university, Galecke, the man largely responsible for so much of UD’s success and upgraded improvements; for whom the university’s annual golf tournament, the Galecke Open, is named; and who has kept the No. 2 parking spot next to the president since his arrival, is retiring this fall for some much-needed rest and relaxation, so he can spend more time with his family and time traveling with his wife.

When Galecke first came to UD in June 1996, the university looked very different. On his first trip to campus, Galecke recalls the bumpy, uneven drive up Northgate and Tom Braniff, which resembled old, unkept country roads in the middle of nowhere. Clark Hall didn’t exist yet, and the athletic fields were actually low lands that routinely flooded.

Indeed, the campus was much different.

When Galecke first interviewed for his position, he expressed his interest for the job to Patrick Daly, associate vice president for administration, and others on the hiring committee, especially if this was going to be a closing chapter to his career. However, if you were to read an autobiography of Galecke, his time spent at UD would be the rising action, and the climax might be any one of his improvements and enhancements to our university.

During his time at UD, Galecke served twice as interim president, as well as a number of other executive-level administrative positions. He’s signed more degrees than he can count and given to the university in more ways than one. He’s worked alongside UD’s endowment committee overseeing substantial increases in our endowment funds, and he’s worked side by side with the past three presidents of our university.

Galecke is most definitely a businessman, having been chairman, president or CEO of public companies in health care, real estate and financial services, in addition to spending 20 years in the commercial banking industry before coming to UD. His attire around campus is almost always business professional, neatly presented, shirt pressed, suit and tie, and the first impression he leaves on others with his wide smile and friendly demeanor is undoubtedly lasting.

Galecke found his first and foremost priority rather quickly when he joined UD.

After a water line break during Parents’ Weekend his first year, he could see there were much-needed improvements to be made to the campus’ overall infrastructure.

“That was kinda like my gee-whiz moment,” said Galecke.

Because of his belief in first impressions, he spearheaded and started one enhancement and improvement project after another. Literally, from the ground up, Galecke began tackling the inadequate infrastructure on campus, everything from expanding student housing to updating underground piping to giving Northgate and Tom Braniff their much-needed facelifts.

He also made it a point to personally visit and meet each faculty chairperson when he first arrived at UD. 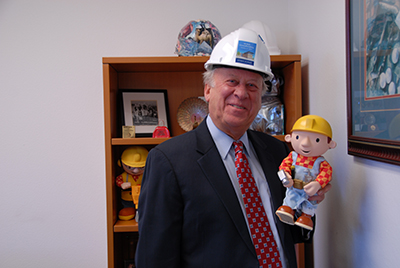 “I’m not a closed-door sort of guy,” said Galecke.

Anyone who has ever worked with or met Galecke can understand this about him, especially with his can-do personality. And if Bob Galecke matched any late ’90s animated child character perfectly, it would be Bob the Builder. At a Board of Trustees meeting one year, Galecke was actually gifted a toy Bob the Builder doll that for now, until Galecke packs up his things to depart from us, sits behind his desk in Carpenter Hall.

Among Galecke’s other notable contributions are the renovations to and expansion of the Ed Maher Athletic Center, the major expansion of the Haggerty Art Village, and, most recently, the not-quite-one-year-old SB Hall and the under-construction Cardinal Farrell Hall, which is expected to open in late 2017.

“So now, either way you enter the university, there is going to be a strong first impression,” said Galecke.

Another significant contribution is the Dallas Area Rapid Transit (DART) rail station on the north side of Texas State Highway 114. After years of negotiating with the city of Irving and DART, Galecke and Daly convinced DART officials to construct the rail line between the highway and the frontage road, thereby avoiding limited access to the land directly adjacent to property owned by the university.

Originally, DART wanted to construct the rail stop on the university’s land at UD’s expense, a price tag that typically comes with city and state-funded tax dollars. But through negotiations with DART, the rail line was constructed off of university land, while the station was built on UD’s land, but at no cost to the university.

The new rail stop now gives students a new method of transportation while simultaneously increasing the value for the land owned by UD.

“That was a huge negotiation with the city, DART and the Texas Department of Transportation (TxDot),” said Galecke, who helped put UD into the light rail future, connecting the university to Dallas and the Dallas/Fort Worth International Airport for the next century.

Galecke’s vision for the university stretched beyond just the Irving campus. When he first joined UD, the university was just finishing construction on its Eugene Constantin Campus in the Due Santi locality just outside of Rome, Italy, but there was still a lot of work that needed to be done.

Galecke helped upgrade everything, from landscaping and planting the new vineyard to furnishing and installing an earthquake-safe roof on the Villa. “Some of these things you just don’t see,” said Galecke.

“Our Due Santi Campus is one of my prized achievements,” said Galecke. “We spent a great amount of time enhancing and completing the campus, which has become such a special place for our students.” 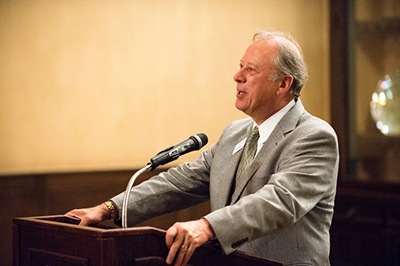 His vision for the University of Dallas would never have been realized had Galecke not also become an active community leader for the city of Irving. He became a director on the Irving - Las Colinas Chamber of Commerce and the Irving Convention and Visitors Bureau. He became president and director of the Irving Flood Control District 1, which is responsible for protecting 660 acres of land and over $300 million of assessed value commercial properties, including property owned by the university.

He came to know all of the Irving city council members and the city’s senior staff, and because of his connections, the university now has an ever-more strengthened relationship with Irving.

“Bob’s always been very active in building relationships, and I think this has significantly helped UD,” said Daly, who’s worked hand-in-hand with Galecke for the past two decades.

Indeed, UD would look entirely different today had Galecke not stepped into the fold in the late ’90s.

Without Galecke’s connections and prowess as a master planner and builder, it’s safe to say that none of what you see today would have been possible; his list of enhancements and achievements has undoubtedly transformed our university for the better.

The once flooded athletic fields are no longer deluged in water.

Northgate and Tom Braniff received their major overhauls, which significantly enhanced UD’s aesthetic appeal to visitors and gave students safe, clean sidewalks for walking to and from campus and jogging or biking.

DART put UD on the light rail line, and now students have an alternative mode of transportation.

And SB Hall and Cardinal Farrell Hall will give visitors to UD’s Irving campus a lasting impression.

“It's quite an impressive view,” said Galecke from atop the hill on Crusader Court. “I have to say, I honestly didn't think it would take 20 years.”