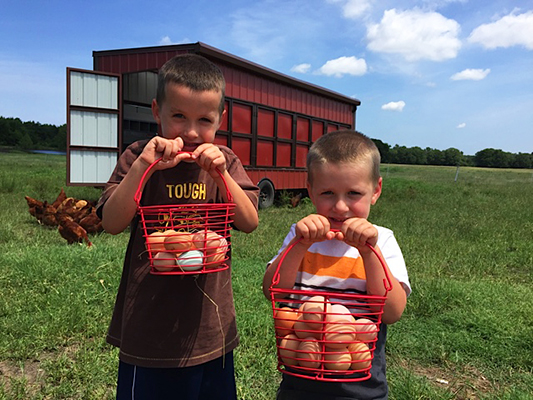 From Oregon to Ohio, from backyard beekeeping to completely self-sustaining farms, alumni are seeking simpler, healthier lifestyles through old ways and traditions.

Shawn, BA ’82, and Beth, BA ’85, Dougherty began with a garden. In 1985, they were newly married and both working for UD; on a small plot of land down by the Trinity River, between campus and Groundhog Park, they grew vegetables and kept chickens.

The Doughertys’ ultimate goal was to live in the country and raise their own food. In 1990, they bought 16 (later expanded to 24) acres of land designated by the state of Ohio as “not suitable for agriculture.”

“The multiple micro-ecosystems on our steep, stony acres inspired many of our present farming practices,” said the Doughertys.

The Dougherty farm includes cows for both beef and dairy, hogs, sheep and mixed poultry. They also keep a community herd of six to eight lactating cows; about 20 local households have a share in this herd, paying a monthly fee for the animals’ care in exchange for a share of the raw milk the herd produces.

Their farm is a mixed-species intensive grazing operation; the largest crop is grass, which all the animals consume as their primary food source. The crops, including those for animal feed, take up about an acre.

“With passive solar high tunnels, we have fresh vegetables 12 months of the year,” the Doughertys said. “All our practices are uncertified organic (U.O.). Intensive rotational grazing and natural seasonal foods protect our animals from pathogens and parasites.”

The basis of the Doughertys’ methods is their conviction that a true farm arises from proper management of grass and other plant species, is fueled by sunlight and rainfall, and doesn’t depend on outside energy sources.

“This means small -- big equipment needs lots of fuel -- and relying on grass, not grain, as the foundational animal feed,” they said. “Humans have to learn to eat from the farm -- a diet built around milk, butter, cheese, fresh vegetables and meat: high-quality food with a positive ecological footprint.”

All eight of the Doughertys’ children have been involved in their farm; it was (and is, for the younger ones) the ideal setting for homeschooling them.

Kristina Weisbruch Holleman, BA ’93, and her husband, RW, bought their land in the vicinity of Greenville, Texas, 11 years ago to have space for their kids (now eight of them), a large garden and a couple of horses.

“It wasn’t until six years later that we realized we could, and probably should, try to produce something on our land,” Holleman said.

The Hollemans began by raising food for themselves: a steer for beef, a couple of pigs, a few laying hens and their first Jersey cow. They now raise pastured chicken, eggs and pork, which they sell through The Provision House in Richardson, Texas. They also raise and breed Dexter cattle and still keep a Jersey cow for milk for their family.

“We love knowing where our food is coming from, and we also love the hands-on labor and the unique rhythm that farming brings to our family life,” said Holleman.

Other alumni are contributing to sustainable practices in less all-encompassing, but still important, ways. For example, in a small backyard in Portland, Oregon, Jeff Gierer, BA ’03, has been keeping bees for the past eight years.

“We met a beekeeper in our neighborhood on a garden tour, and he encouraged us to explore bees in our own yard,” Gierer said. “We keep bees because of the stories people share about their relationships to them, the delight my students and neighbors have in learning about them, and a desire to keep healthy and natural beekeeping practices as part of our tradition.”

According to Gierer, beekeeping requires a small financial investment (approximately $200 will get you what you need for one colony), a fair amount of initial reading (he recommends Sue Hubbell’s “A Country Year”), mentoring by “old salt ‘beeks’” (one of his encouraged him to call the queen a “mother” and her hive the “family”), much trial and error, and appreciation for the bees.

“Usually when I’ve been stung by one of our bees, I realize I was making a careless mistake or mooning over their charm rather than giving them the respect wild animals deserve,” said Gierer. “I think there’s romance in beekeeping, but regard for the ancient animals’ well-being and modesty before them is essential.”

The Doughertys and the Hollemans agree that practicality must play a role in any type of sustainable farming or urban homesteading venture.

Shawn Dougherty advised, “Avoid debt. Borrow land if you don’t own any. Start small, and don’t invest in expensive single-use tools unless you know you need them.”

“In our enthusiasm we started several different farm ventures all at once, spread ourselves too thin and learned a lot from some tough mistakes and losses,” said Holleman. “Now we move more slowly.”

Yet, faith is a necessary component, as well.

“Often we moved forward with a project despite much that should have discouraged us, impelled by the belief that what should be, may be,” the Doughertys said. “We owe a debt we cannot measure to UD for reinforcing in us a belief in the unity of beauty, goodness and truth and the conviction that only these are worth living and laboring for.”

Note: The Doughertys have a book on sustainable farming, "The Grass-fed Homestead," which will be available in fall 2016. Learn more on their website.

In the photo: Two of the Holleman children; photo courtesy of Kristina Holleman.