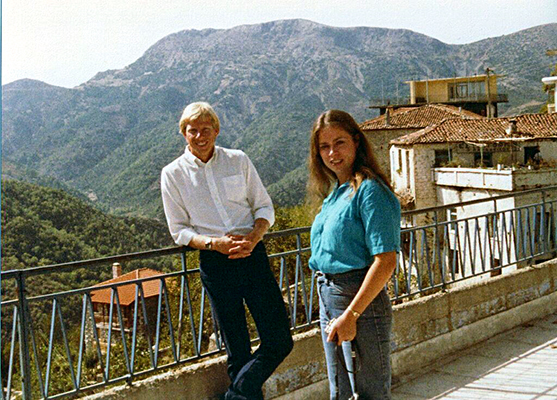 Jim Petzel, BA ’75, wasn’t able to go to Rome when he was a student at UD. When he came to UD as a freshman in 1971, the Rome Program was still in its infancy; it had only started in the fall of 1970, with approximately half the number of students who currently attend each semester.

After getting a bachelor’s in history, Petzel headed back home to California, where he earned his master’s in history from Cal State Fullerton in 1978. He then returned to the Dallas/Fort Worth area to pursue his doctorate at Texas Christian University (TCU). At lunch one day with UD Department Chairman and Professor of History June Welch, he learned of a job opening for a history lecturer on the Rome campus. After a meeting with Welch, Dean Tom Jacob and President John Sommerfeldt, Petzel got the gig and packed his bags for Rome.

“It was exciting living in Rome for the first time, teaching Western Civ and experiencing history and modern Europe with my students,” said Petzel. “We were learning together. We would study Rome in class, then we would hop on a bus and be in the heart of it at the Forum -- talking about the glories of ancient civilization and then seeing it unfold before our eyes. To experience that as a group, together, was a transformative experience. It was the highlight of my life.”

Teaching Western Civ was Petzel’s primary job; he taught the 8 a.m. class for 90 minutes daily and would rouse the students out of bed every morning. On one of his first Greece trips, however, he had an experience that would lead to him ultimately changing his career and the course of his life: on the bus, his colleague, Rachel McClung, BA ’68 MA ’70, who taught art, suggested he come up and take charge of the microphone to play tour guide. The students started cheering, and Petzel felt a glimmer of what his future would be.

At the time, the home base of the Rome program was the Hotel LaVilla on the outskirts of the city. Long-time travel agent Francesco Stoppini made arrangements for the students and owned the hotel. At the end of that first school year, he asked Petzel what he was doing for the summer.

Petzel told him he was going home to California, working on his dissertation and visiting family.

“No, you’re not,” Stoppini replied. “You’re going to stay here and help me.”

And that’s what Petzel did: he became Stoppini’s right-hand man.

“I helped him with shepherding students, running interference, checking in groups and working as a local guide on the motorcoaches leading tour groups around Rome,” said Petzel. “At the hotel, I also ran the cappuccino bar, lifeguarded at the pool, acted as liaison with the Italian staff and just made sure it all went smoothly.”

He worked with Stoppini for three summers while teaching in the Rome Program during the school years, from 1980-83. After leaving UD, he taught for a semester in Northlake College’s Rome program, which was started by McClung after she left UD. Northlake students lived on the same hotel property but in another set of buildings; because McClung was an art professor, their program was more centered on art.

During this time, Petzel had many long weekends, not to mention the 10-day breaks each semester, when he “took to the rails,” traveling around Europe with his Eurorail pass. He would sometimes meet up with students in various cities to have coffee or a beer; then they would disperse again on their separate ways.

“Once, on a train in Norway, I thought, ‘You know, this is a pretty good life, traveling to all these European capitals. I enjoy this,’” said Petzel. “I came to realize that I enjoyed the traveling as much as or more than teaching.”

This realization is what led Petzel to the travel industry. Initially after he finished teaching in Rome, he headed home to Los Angeles to work in student travel managing a retail travel agency, and after a year or so of that he went back to Italy, Florence this time, to manage tours for a student tour operator. The cruise industry was just starting to boom, so he started working with a nationwide retailer of luxury cruises and tours; he then delved into the marketing side of the business, where he stayed for nearly 27 years.

“I traveled extensively,” Petzel said. “Three or four times a year, I would get all my marketing done, then hit the road. I traveled all over the world: Europe, the Orient and China, South America, the Middle East and Africa -- from the rain forests of the Amazon to mountaintop villages in Yemen. My background in history was beneficial because history is a foundation of the travel experience.”

Petzel retired about six years ago after a career that spanned well over three decades, including serving as vice president of marketing at Travel of America in southern California for more than 18 years. These days, a large amount of his time goes toward acting as caregiver for his 89-year-old mother and 95-year-old aunt in Mesa, Arizona.

“I manage their trusts and affairs; it’s a joy to do that for them,” Petzel said. “My family was very generous, providing me with an excellent education; I’m quite happy to help them now.”

Petzel, who still does some consulting and writing for the travel industry, intends to give back to the UD community, as well, by establishing a scholarship to help students go to Rome -- those who, like himself as a student, might not otherwise get to, who in fact might not otherwise even consider it due to the financial strain it would put on their families. Petzel’s estate gift, provided for in his will, ensures that future students can participate in the life-altering experience of the Rome Program.

“I’m very grateful for the outstanding education I received at the University of Dallas as well as the fabulous opportunity to teach in the Rome Program,” said Petzel. “Our world today has grown smaller and, with technology, is more interconnected than when I lived in Rome in the ’80s. And so it may be even more important that students have the opportunity to go to Rome, to experience another culture firsthand. It broadens horizons tremendously, and I want to provide students with a world perspective, particularly for less privileged students. Whether you’re in Rome, Italy, or Irving, Texas, we’re all part of the human family.”

In the photo: On the way from Olympia to Nafplion, Greece, in October 1981. Photo courtesy of Jim Petzel.