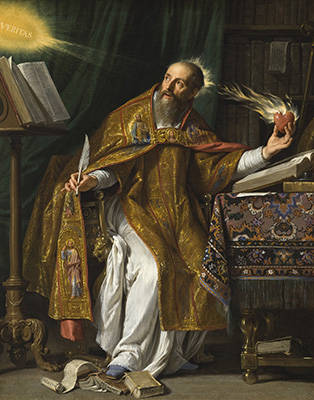 Michael Foley, Ph.D., professor and scholar, will deliver the University of Dallas Constantin College of Liberal Arts’ second annual Galbraith Lecture on “The Hidden Unity of St. Augustine’s Confessions.” The event, which will be held Thursday, April 14, at 7:30 p.m. in the Art History Auditorium, is free and open to the public.

“We’re excited to have Dr. Foley for several reasons: he’s a celebrated scholar focusing on the works of St. Augustine, and his lecture will highlight the topic of his current book project; he’s an engaging speaker who’ll have a wide appeal; and he’ll be able to bring into special relief a much-beloved work that both current students and alumni have spent time working through and reflecting upon, the ‘Confessions,’” said Jonathan J. Sanford, dean of Constantin College and professor of philosophy.

Foley is an associate professor of patristics at Baylor University. He received his doctorate from Boston College. His specialties are patristics and St. Augustine of Hippo; his research interests include the thought of St. Augustine, liturgy, comedy and tragedy, and classical political philosophy. Foley is currently working on a translation of St. Augustine’s “Cassiciacum Dialogues” as well as a book on the unity of the “Confessions.”

There will also be a bonus talk on Friday, April 15, at 4:30 p.m. in Upstairs Haggar: "Drinking Like a Saint," based on Foley's book "Drinking with the Saints: The Sinner’s Guide to a Holy Happy Hour." Wine and cheese will be served.

With special thanks to the family of Alex T. Galbraith, this lecture is part of the Constantin College Galbraith Lecture Series, which each year brings to campus speakers of academic and professional distinction whose expertise complements the central texts and themes of UD’s Core curriculum.

For more information on the lecture, visit https://udallas.edu/calendar/event/1565/constantin-college-galbraith-lecture.