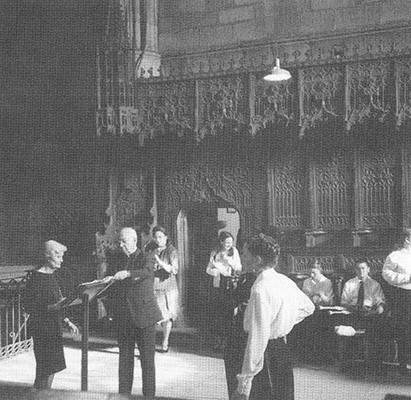 Cistercian Father Ralph March, born Rudolph Mayer in Körmend, Hungary, on Feb. 21, 1922, came to UD in 1956 as one of the original faculty members; he became a founding member of the Cistercian monastery Our Lady of Dallas that same year. At UD, he taught music and, in the early days, also foreign language.

The youngest of three brothers who all became priests, Father March was accepted as an oblate of the Cistercian Monastery of Zirc as a young teenager, pursuing his high school studies at the Cistercian School of St. Irme in Budapest. Upon his graduation in 1940, he entered the novitiate of the Cistercian Order in Zirc, where he also studied philosophy and theology in preparation for ordination to the priesthood. He was ordained a priest in the Abbey of Zirc on the day World War II ended in Europe: May 8, 1945. He returned to Budapest to continue his studies at the University of Budapest and Franz Liszt Music Conservatory.

His abbot sent him to Paris in 1947 to complete his studies in French and music. After earning a master’s of chant at the Sorbonne, he obtained his doctorate from the Faculty of Letters of the Institut Catholique. His dissertation was the first musicological study of the 12th-century origins of Cistercian chant and was published in Rome in 1952; to this day, it is a foundational text for chant studies. Also in 1952, Father March emigrated to the U.S., as the Communist suppression of the Abbey of Zirc in 1950 had made return to his homeland impossible.

Joining fellow Cistercians exiled from Hungary in the Cistercian monastery in Spring Bank in Wisconsin, Father March taught at Marquette University in Milwaukee prior to coming to UD.

“I was an undergraduate at Marquette University,” said University Historian Sybil Novinksi. “At Marquette, you could get excused from P.E. by taking Sacred Music. It had an old, smelly gym at the time, so I opted for Sacred Music. My teacher was Father Ralph! When Lyle and I arrived at UD in the fall of 1960, one of the first persons I met was Father Ralph, who greeted me very warmly; it is a small world.”

From 1966-74, Father March was editor of the quarterly Sacred Music, the oldest magazine of church music in the U.S. From 1977-87, he served as music director for Cologne Cathedral in Cologne, Germany.

“That he left UD to become choir master for Cologne Cathedral was a big deal,” said Novinski. “The university did not have a music major, and when the opportunity presented itself, it was a great honor. He was known for his knowledge of Gregorian chant and his skill in teaching it.”

Father March returned to Our Lady of Dallas and to UD in 2000; for the next 12 years, he worked with Marilyn Walker, who was the director of the Music Department at UD, to establish the Collegium Cantorum, then to teach and conduct Gregorian chant for the acapella choir. He was much loved by his students.

“Those of us who knew him as students and singers can attest to his wit, gentleness, humor and careful attention to detail,” said Lewis. “His life was characterized, first and foremost, by love: love of music and liturgy (properly done, of course!), love of wine (with discerning palate and catholic taste), love of his students, love of Marilyn Walker and, greatest of all, love of God.”

“All of us who were blessed enough to have known Father Ralph during his life on this earth are far richer for his presence in our lives, and his absence from this world can only be borne as grief that points to the hope of Life Eternal in Heaven,” said Lewis. “Toast to Father Ralph’s life, pray for the repose of his soul and wait in hope for our future reunion with him in the Lord.”

A rosary will be recited Monday, Feb. 8, at 7:30 p.m. in the Our Lady of Dallas Abbey church. The funeral Mass will be celebrated Tuesday, Feb. 9, at 2 p.m. in the abbey church. Burial will follow at Calvary Hill Cemetery in Dallas.

In the photo: Father March with Marilyn Walker and the Collegium Cantorum in Spain in 2002.