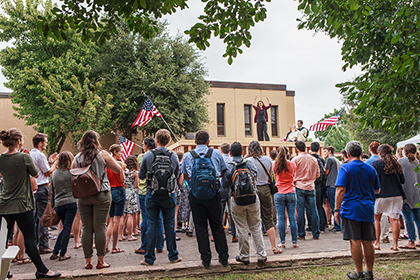 October is my absolute favorite month of the entire year, and there’s plenty to do around the Dallas-Fort Worth area and at the University of Dallas.

For starters, the State Fair of Texas, one of the most highly attended and best state fairs in the nation, started today and lasts until Oct. 23. ‘Tis the season for all you batter-lovin’ deep-fry fanatics — gorge on some fried ice cream, oreos and coveted fried twinkies, and head to Fair Park in Dallas. Bring extra napkins and, if needed, a change of clothes incase things get too messy.

Now let’s take a look at what’s happening this weekend at UD. The 10th annual Dallas Ministry Conference will last until Saturday at the Kay Bailey Hutchison Conference Center Dallas; From 9 a.m. to noon on Saturday you can kick off Charity Week early (which begins Monday) and volunteer at the Hope Supply Co. — a nonprofit dedicated to meeting the critical needs of homeless children in North Texas; and at 11 a.m. Saturday you can attend “George Washington: America’s Classical and Christian Founding,” hosted by UD’s history department and UD’s chapter of the Intercollegiate Studies Institute (also known as the Tocquerville Society), in Upstairs Haggar.

If you caught the early Mass, then there’s still time to catch the men’s and women’s soccer teams throw down against Centenary College of Louisiana at noon and 2 p.m., respectively.

Charity Week has officially begun today! That’s right, your favorite time of the year, when you can lock up your friend or favorite professor for a price (or donation). Those accused (or jailed) have three choices: do the time, pay bail or run for it. Charity Week lasts all week through Saturday, Oct. 8, so gear up for a week filled of memories, community and giving.

This year’s theme: “Lions, and Tigers, and Charity, oh my!,” which was inspired by the hit broadway musical “Wicked: The Untold Story of the Witches of Oz,” and, of course, the 1939 Hollywood classic “The Wizard of Oz.”

One of my favorite Charity Week events: Airband, which is at 8 p.m. in Haggar — don’t forget to bring your hair-shredding and air guitar skills. You get one vote for $1, or two votes and box seating for $3.

Read this week’s Charity Week story to learn more about this week-long fundraiser, which charities are being donated to and who is responsible for organizing this year’s Charity Week.

Do you have an affinity for writing (like me) and share just as much love and devotion to Catholicism? Writers need to know other writers. We are like a community — there aren’t many of us and we are a dying breed — and without each other we will go nowhere. I command you, pick up your pens, immerse yourselves and learn who your fellow writers are: join the student chapter of the DFW Catholic Writer’s Guild in Haggerty Science 042 at 7:30 p.m.

For those who have a passion for debate on foreign, economic and national security policies, the Alexander Hamilton Society — dedicated to the belief in the American political system — meets in Gorman E at 7 p.m.

Need to destress between classes and take in some soothing music from UD’s Music Department? Pack a lunch today, because this semester’s Brown Bag Recital is in the Upstairs Haggar Dining Room from noon to 1 p.m.

Superintendent for Dallas Catholic Schools, Matt Vereecke joins UD for an evening of conversation, where Vereecke will discuss Catholic education and the Dallas Diocese’ strategic plan. Enjoy some free food and snacks in the Gorman Faculty Lounge from 6:30-7:30 p.m.

You can also join in on the Charity Week festivities and sign up for the Quiz Bowl in the Rat at 8 p.m., but only if you think you have what it takes to outwit and outsmart.

Entrepreneurs are a special breed of people, they have dreams, visions and an especially hard work ethic. If you fancy yourself one of these rare breeds then join the Entrepreneurship Society and Market Share at 5:30 p.m. in the Gorman Faculty Lounge.

Macs will always destroy PCs. I’m a Mac guy — and I know nothing about computers. If you’re nothing like me and love all computers (especially PCs), then you can join the Computer Club in Haggerty Science 001 at 7 p.m.

Enjoy Music on the Mall, starting at 10 a.m., while you’re walking between classes or headed to lunch. If you feel the need to start singing along, by all means, keep that to yourself for when you’re in the shower.

Henry V, Act 2, Scene 3: “His nose was as sharp as a pen, and a’ babbled of green fields.” Yes, I just quoted Shakespeare (and another admission, I was also an English major), his plays are packed with wacky humor and gruesome battle scenes, and some very important messages that have outlasted Shakespeare’s time. Classical school headmasters are invited to join UD’s Classical Education Graduate Program to explore the meaning and significance of leadership through the lens of Shakespeare's Henry V in this continued series, “Headmaster Symposium Series: Leadership in Classical Education,” which lasts from 9 a.m. to 2:30 p.m. in the Constantin Boardroom in SB Hall. If you wish to attend you must RSVP by Monday.

To continue the series, UD’s own William Frank, professor of philosophy, will present “Philosophy Colloquium: The Secular Age” in Braniff 201 from 3-4 p.m. Did I mention one of Frank’s areas of specialty include Catholic philosophy and social teaching?

Enjoy the fall weather and support UD’s men’s and women’s soccer teams as they throw down against Schreiner University at 2 p.m. and 4 p.m., respectively.

In celebration of Charity Week, from 8-10 p.m., you can watch sketches and performances from some of UD’s finest men — and by finest men, I mean UD’s Rugby team dressed in full thespian —  in Haggar for the live Male Auction. UD ladies, who do you want most?

For a complete listing please visit UD’s calendar of events.