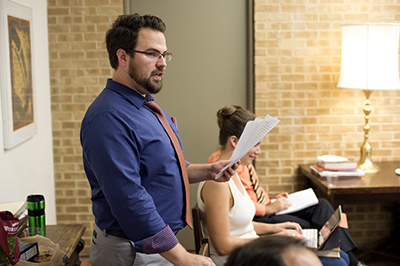 The Second Annual Braniff Conference in the Liberal Arts will be held Jan. 29-30, 2016, on the UD campus in Irving.

In 2015, the Braniff Graduate Student Association (BGSA) began the tradition of an annual liberal arts conference with the aim of reflecting the unique interdisciplinary nature of the Braniff Graduate School of Liberal Arts and its emphases on both classical education and contemporary scholarship. The theme of the 2016 conference is philosophy and poetry. Featuring a keynote address by the poet laureate of Virginia, Ron Smith, the conference will include presentations on Aquinas, Milton, Plato, Spenser and others by graduate students from across the country and even overseas.

"This year's conference will build on the interdisciplinary approach of last year's, bringing in students with backgrounds in theology, philosophy, literature, politics and law,” said BGSA president Rhett Forman.

The keynote speaker, Ron Smith, is the author of “Running Again in Hollywood Cemetery,” runner-up for the National Poetry Series Open Competition and the Samuel French Morse Prize and subsequently published by University Presses of Florida. His other books -- “Its Ghostly Workshop,” “Moon Road: Poems 1986-2005” and the forthcoming “The Humility of the Brutes” -- are published by LSU Press. His poems have appeared in many periodicals, including The Nation, New England Review, Southern Review, Kenyon Review, Georgia Review and Puerto del Sol, as well as in anthologies in the U.S., Italy, Canada and the U.K.

Smith holds degrees (B.A., M.A., M.H. and M.F.A.) in philosophy, English, general humanities and creative writing, and he has studied writing at Bennington College in Vermont, British drama at Oxford, and Renaissance and modern culture at the Ezra Pound Center for Literature in Merano, Italy. He is a winner and now curator of the Carole Weinstein Poetry Prize. He has taught at several universities and is currently the writer-in-residence and the George O. Squires Chair of Distinguished Teaching at St. Christopher's School in Richmond, Virginia. He is also the poetry editor for Aethlon: The Journal of Sport Literature.

“Smith is not only a fine educator with a strong background in the liberal arts, but he has also made his way in the world as a professional poet, so I think it will be interesting to see how the theory and practice of poetry collide at this year's conference," said Forman.

The Braniff Conference in the Liberal Arts is made possible by the support of Braniff graduate students, with additional support from the Department of English, the Department of Politics and Braniff Graduate School Dean Joshua Parens, Ph.D.