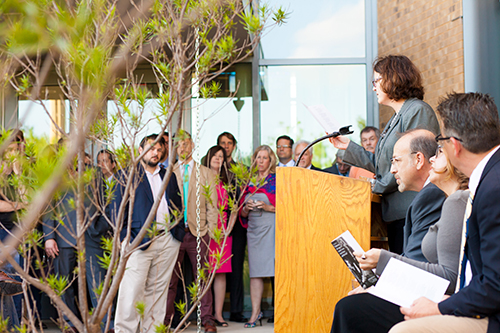 Huddled outside the front doors of SB Hall, an intimate group of UD alumni, students, professors and patrons gathered for an informal poetry reading of UD’s own Louise Cowan’s favorite poetry for this spring’s Braniff Salon: “Celebrating the Legacy of Louise Cowan: Lyric Poetry and the Soul.” 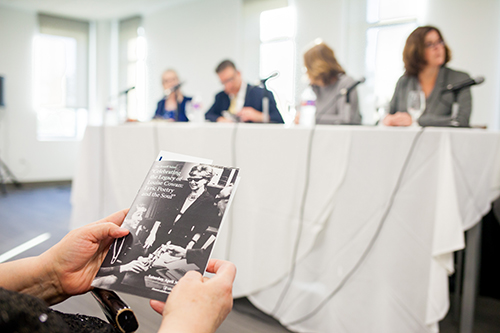 “The Braniff Salon is always an enjoyable event. I try hard—and so far with great success—to make it both elegant and relaxed,” said Michael D. Terranova, one of the event’s organizers.

Terranova decided to carry on UD’s Braniff Salon tradition after he attended his first Braniff Salon five years ago, which at the time was specially curated for UD alumni. After a few years’ hiatus and no Braniff Salon in sight, Terranova called up the alumni office and asked how he could help.

“We were so excited to have something intellectually stimulating to attend,” said Terranova.

During the poetry reading — which included John Keats’ “Ode on a Grecian Urn,” John Donne’s “The Canonization” and William Butler Yeats’ “Leda and the Swan” — listeners reflected on each verse, each word and each pause.

To Cowan’s former students, the poetry reading offered a glimpse back into her classroom, when they first met the famed instructor.

Cowan taught at UD for 53 years. She served as chairman of the English Department, professor of English and dean of graduate studies during her time at the university. She was also co-founder of the Braniff Graduate School and one of the founders of the Dallas Institute of Humanities and Culture, among much more.

Cowan passed away in November in Dallas at the age of 98.