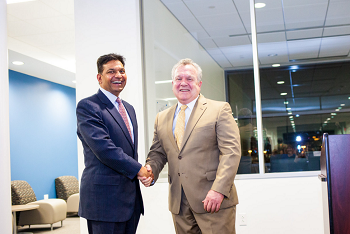 Established last year with the induction of former Dallas Cowboys fullback Robert F. Newhouse Jr., the hall of fame was founded to recognize, honor and celebrate outstanding business leaders who have achieved significant success in their chosen fields of business and embody the spirit of the Satish & Yasmin Gupta College of Business. Inductees were recognized during a Jan. 14 ceremony that took place in the business school’s new home, SB Hall.

In 1981, Satish Gupta, MBA ’81, founded steel distribution company SB International Inc. Along the way, Gupta capitalized on opportunities that have enabled the company to become a leading supplier and manufacturer in its industry. For several years, Satish Gupta has supported the Dallas community in varying capacities including his involvement in the Southwestern Medical Foundation, the Primary Care Clinic of North Texas and the Greater Dallas Arya Samaj Cancer Clinic, as well as founding the Gupta Agarwal Charitable Foundation.

Following the court-mandated breakup of the Bell System in the early ’80s, Gordon “Don” Hutchins, MBA ’75, became an advocate of competition in the telecommunications and technology industry. His work as CEO of various domestic and international companies, many of which led to groundbreaking advancements in the telecommunications industry, established Hutchins as a recognized leader in the technology field. Today, Hutchins is president and chief operating officer of Fusion, a publicly traded cloud services technology company.

Heather Kreager, MBA ’03, has served Sammons Enterprises for 30 years in various capacities and across several industries. Recently named 77th on the Forbes list of America's largest private companies, Sammons Enterprises is a diversified holding corporation operating across five countries. Since being named CEO in 2014, Kreager has carried out the late founder's wishes and orchestrated the transition of the company to a 100 percent employee stock ownership plan, developed cohesion in Sammons’ vast holdings and maintained a culture of community involvement and support.

After 18 years in the investment industry, Richard Long, MBA ’85, founded Valley View Consulting LLC in 1999. With a focus on Texas public entity investment management, Long is currently responsible for more than $3 billion of public funds. His work includes active engagement in public funds investment legislation, investment policies and strategies, and various other tactics.

With 30 years at Plano-based Air Distribution Technologies, Terry O'Halloran, MBA ’83, developed the company into a $1 billion operation. In 2014, Johnson Controls acquired the air distribution manufacturer, placing O'Halloran at the helm as vice president and general manager. Known today as Air System Components Inc., the company is one of the largest air distribution and ventilation products providers in North America.