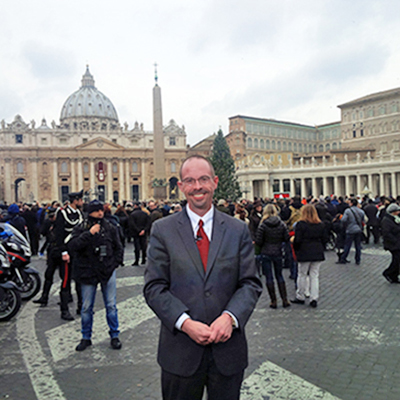 John L. Allen Jr., editor of the independent Catholic news site Crux and senior Vatican analyst for CNN, will address graduates during UD's annual commencement exercises for the Constantin College of Liberal Arts, the Braniff Graduate School of Liberal Arts, the School of Ministry and undergraduates of the Satish and Yasmin Gupta College of Business. The ceremony will begin at 9 a.m. Sunday, May 15, on Braniff Mall.

“John Allen is a gifted speaker and a long-time friend of the University of Dallas, having lectured on both our Rome and Irving campuses,” said University of Dallas Provost C.W. Eaker. “The university is extremely fortunate to have Mr. Allen as its commencement speaker this year.”

When Allen was called upon to put the first question to Pope Benedict XVI aboard the papal plane en route to the United States in April 2008, the Vatican spokesperson said to the pope, “Holy Father, this man needs no introduction.”

Allen is the author of 10 books on the Vatican and Catholic affairs and a popular speaker both in the United States and abroad. The London Tablet has called Allen “the most authoritative writer on Vatican affairs in the English language,” and renowned papal biographer George Weigel has referred to him as “the best Anglophone Vatican reporter ever.” Allen previously served both as a senior correspondent for the National Catholic Reporter and as associate editor of the Boston Globe. Allen’s most recent book is “The Francis Miracle: Inside the Transformation of the Pope and the Church.”

Allen was a keynote speaker at the University of Dallas Ministry Conference in fall 2015. His address focused on the Synod of Bishops on the Family, a three-week meeting of bishops that concluded on Oct. 25. Additionally, he was the speaker for the eighth annual Landregan Lecture in 2006.

Allen lives in Rome and Denver and holds a master’s degree in religious studies from the University of Kansas.