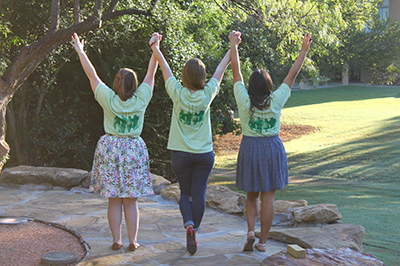 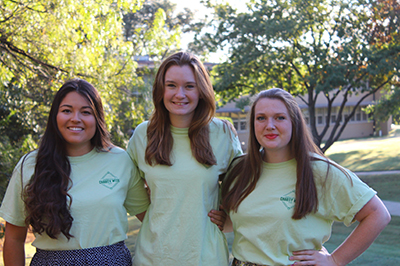 Next week kicks off the long-held junior class tradition, Charity Week, which lasts Monday through Saturday, where the UD community will rally together to raise funds for three nonprofits that fall in line with the university’s Catholic identity — Project Ultrasound, The Chromosome 18: Registry and Research Society and Heifer International. After being split apart for the past year traveling and studying in Rome during the spring and fall semesters, our junior class is reunited.

“We thought that would be fun, because ‘The Wizard of Oz’ has so many different elements,” said Grubbs.

With a little inspiration from the hit broadway musical “Wicked: The Untold Story of the Witches of Oz,” and, of course, the 1939 Hollywood classic “The Wizard of Oz,” the co-chairs unanimously agreed on the Oz-themed Charity Week after gathering feedback from their class.

Serna, who selected the nonprofit The Chromosome 18, which researches treatments and interventions of chromosome 18 disorders, lost her brother to Trisomy 18, the most common of these chromosome 18 abnormalities that typically go undiagnosed during pregnancy. According to The Chromosome 18, most children with Trisomy 18 die before birth or shortly thereafter, and only five to 10 percent of babies with this particular chromosomal abnormality will live past their first birthday.

“This means the world to me. I never got to meet my brother,” said Serna. “It means another family is going to possibly get a chance to hold their child.”

All three charities have a strong connection to UD’s Catholic ideology and have never been included in Charity Week.

“I think Charity Week is really important — we do this every year — but the thing about traditions is they tend to lose their authenticity,” said Grubbs.

By selecting these three new charities —  Project Ultrasound, The Chromosome 18 and Heifer International — these Charity Week organizers hope to re-emphasize UD’s support of charities that follow the Catholic teachings of the university, while giving students the opportunity to explore and experience different ways of making a difference.

As for the other two charities, Heifer International aims to end world hunger and poverty by empowering families, and Project Ultrasound provides crisis pregnancy centers nationwide with ultrasound machines. “I wanted to include a pro-life charity,” said Grubbs, who selected Project Ultrasound. “I thought, ‘Why not bring a new message?’”

All the funds raised during Charity Week will be split equally between the three charities — they expect to raise anywhere between $15,000 and $20,000. Grubbs, Hinze and Serna noted that Alumni & Family Weekend, which typically falls during Charity Week, will instead take place Thursday, Oct. 13, through Sunday, Oct. 16, meaning that all donations will be raised by students and faculty during Charity Week.

To draw students out of their residence halls, there will be plenty of activities and games — everything from the jail, where you can lock up your friend or favorite professor, to running in the 5K. While the majority of Charity Week’s traditional activities and games are coming back, a few will be replaced with an open mic night, where students or professors can donate to have someone perform live karaoke.

The Mall will be chalked yellow, resembling the yellow brick road in “The Wizard of Oz,” and the lamp posts around campus will be wrapped in green cellophane to resemble the Emerald City.

“We’re really excited to give these charities the money they need to be successful,” said Serna.

Visit UD’s calendar of events for a complete schedule during Charity Week.