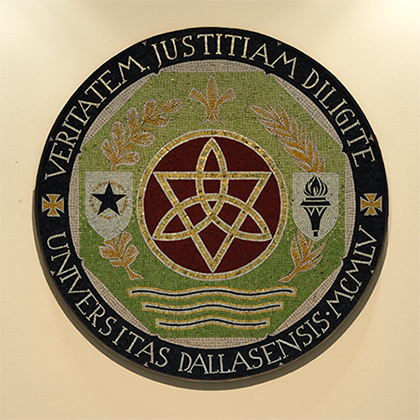 The mosaic seal in Haggar University Center. The stone sign on Northgate. The marble statue of Mary outside the Church of the Incarnation. These various pieces that enrich and beautify our campus, largely taken for granted by everyone who comes after as things that must always have been here, were actually gifts from graduating classes through the years.

University Trustee Tan Parker, BA ’93, was part of the Class of 1993 senior committee that raised money for the stone “University of Dallas” sign on Northgate Drive, according to University Historian Sybil Novinski. Many have now heard the story of the marble statue of Mary, the beginning of the idea for a Marian shrine at UD and a gift from the Class of 1997; it was sculpted by art majors and Class of 1997 members Andrew Decaen, BA ’97, and Erin Winogradoff, BA ’97.

Pieces created by students, former students or alumni have remained a common theme: the Class of 2002, for example, commissioned former student Xavier Zamarripa, who attended UD from 1998-2000 and went to Rome with many Class of 2002 members in the fall of 1999, to create the full-color mosaic seal that hangs in Haggar University Center (which was also originally intended to possibly be incorporated into a Marian grotto).

“I was commissioned by the Class of 2002 in the fall of 2001, and the mosaic seal was unveiled at graduation,” said Zamarripa, a talented artist whose wife, LoriAnna (Pfaff) Zamarripa, BA ’02, was also a member of the donating class.

“If my memory serves me right, Sybil Novinski pulled out from the Archives the official seal in black and white with a description of the symbols and colors, which was in Old French,” said Zamarripa. “I sent it off to my friend, who is a judge in France and versed in this dialect, to translate. Sybil, the senior class and I had agreed that if I was going to make this painstaking, detailed mosaic, it was going to be the first historically color-accurate creation of the seal of UD.”

Last year, the Class of 2015 donated the pocket garden at the base of the Shrine to Our Lady of Guadalupe. This year, the Class of 2016’s gift to the university was crucifixes for SB Hall, given in memory of Zach Clark and seminarian Daniel Phillips, two members of their class who passed away.

“The Class of 2016 gift of international crucifixes was selected as the result of a long conversation with our class and administrators,” said Joe Dougherty, BA ’16. “We looked at the practical and aesthetic interests of our class and President Keefe and found a project on which they converged substantially.”

Dougherty said that the senior committee chairmen only seriously considered a few other options, including repairing the fountain in Braniff Graduate Building, installing security devices and commissioning a painting of the Sacred Heart and Immaculate Heart for SB Hall.

“One of the co-chairs quashed the other co-chair’s exuberant vision of digging a hobbit hole for our Shire-like community,” he joked.

“We always wanted to keep the project somewhat simple so it could be done within our senior year with the buffer of the summer months after,” explained Jenna Sommer, BA ’16. “That narrowed our gift choices to something that wouldn't cost more money than we could raise ourselves. Joe proposed the idea of putting crucifixes in the new business building to President Keefe when our other ideas didn't work out.”

After President Keefe approved this plan, the students moved on to the logistics: how many crosses? Because SB Hall has seven classrooms, seven seemed like a good number, especially because of the international vision inherent in SB Hall: there would be a crucifix not only for each classroom but also to represent each of the seven continents.

“We ended up adding two more, though, for a total of nine, because why not have as many as we could?” Sommer said.

“The gift is a sign of contradiction for me, the vision of self-sacrifice and ultimate love in a world full of self-love and suffering,” said Dougherty. “God on the cross is a simple image but such a deep mystery. As the gift is dedicated to two deceased members of our class, the crosses are meant to honor the selfless qualities of each young man. I hope that our class sees a reflection of their friends in the figure of Christ. Daniel Phillips died as a seminarian; Zach Clark, as a missionary counselor. By sourcing the crucifixes internationally, we meant to illustrate the fact that Christ died for the whole world; this is the commonality sought by the university and embedded in the bricks of SB Hall.”

Indeed, the gifts always seem to reflect UD’s mission in some way: to pursue wisdom, truth and virtue as the proper and primary ends of education while nurturing the growth and development of the whole person, body and soul. From the bocce ball court to the artwork in the Braniff stairwell to Rome scholarships, UD’s graduating classes seek to enhance the experience for those who come after them.