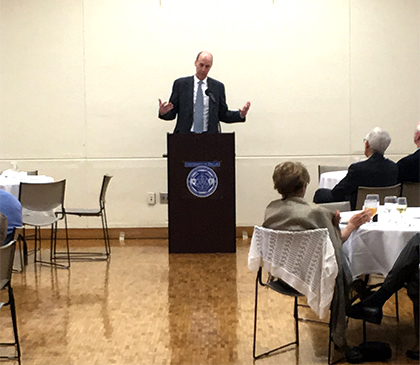 Looking himself like a great judge resting behind his bench, Ethics and Public Policy Center (EPPC) President Ed Whelan addressed the audience gathered to hear him speak about the late Associate Justice of the Supreme Court Antonin Scalia, his mentor and one-time boss. Whelan, a former law clerk for Scalia, came prepared with plenty of reminiscences and anecdotes to share with the intimate crowd of UD alumni, students, faculty and guests gathered in Upstairs Hagger for a quiet evening with the prominent lawyer.

“It’s a real pleasure to be at the University of Dallas,” said Whelan. “My colleague at the Ethics and Public Policy Center called the University of Dallas the best Catholic college in the country. One of my side missions in coming down here is, in fact, to get information so I can convince my daughter, who's a junior in high school, that she ought to come to UD in 15 months.”

Whelan discussed everything from Scalia’s conservative jurisprudence and ideologies to his originalist approach to interpreting the Constitution. Much of Scalia’s work in the courts, however, was not discussed for the sake of time.

“Justice Scalia was a wonderful boss and mentor to me,” said Whelan. “I had the privilege of knowing him some 25 years. It’s a great loss for the country and for the court.”

Whelan is a leading commentator on nominations to the Supreme Court and the lower courts and on issues of constitutional law. He writes essays, commentaries and op-ed pieces that regularly appear in the New York Times, the Washington Post, National Review Online, opinion journals, academic symposia and law reviews.

The event was co-sponsored by the American Public Philosophy Institute, the Center for Thomas More Studies, the Federalist Society and UD’s Constantin College of Liberal Arts.

A transcript of the lecture can be found here.