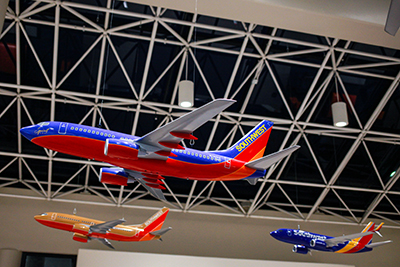 It’s no accident that Southwest Airlines has been profitable for 43 consecutive years. And it’s not a fluke that Southwest has also been named one of Fortune magazine’s most admired companies for 21 years in a row. According to Southwest's Vice President for People Julie Weber, BA ‘91, it’s because of the people.

“One hundred percent of our success is because of the people we hire,” she told students in the Managing Complex Organizations class taught by Associate Professor Richard Peregoy, Ph.D.

Weber cited a few statistics to demonstrate the effectiveness of this policy: “We’ve never had layoffs, even after September 11. We're lowest in customer complaints according to the Department of Transportation, and in 2014, Southwest was the No. 1 performing stock on the S&P 500.”

According to Weber, the key to maintaining an engaged and motivated workforce is to hire the right people for the right job.

“The first step is that you have to know what you’re about,” she said.

And what Southwest Airlines is about centers around core values like having a warrior spirit, a servant’s heart and a fun-loving attitude.

“Every single employee understands what it means to live and work the Southwest way," said Weber. "So these core values are part of every job description, from ramp agents to executives.”

Weber’s experienced recruiters take special care to determine whether an applicant exhibits these core values. During interviews, recruiters ask candidates a series of open-ended, behavior-based questions designed to gather examples of how they've responded in a variety of situations.

“We’re looking for examples of how you went above and beyond for your customers or your fellow employees,” Weber said.

These behavior-based questions aren’t for front-line employees only. Weber personally interviews every candidate for director positions.

“A leader’s job is to serve the team, so it’s especially important that those in leadership positions have a servant’s heart,” she said. “So I might ask a candidate about their team. Do they know what’s really important to the members of their team?”

Southwest’s policy of hiring for attitude and training for skill can result in situations where highly qualified candidates are passed over because they do not exemplify the company’s core values.

“This is a very tight labor market,” Weber said. “But Southwest has decided that we won’t compromise on our hiring practices. It takes a lot of courage, but we stand by what we believe will make us successful. We’re not going to sacrifice hiring for attitude.”

In a recent survey, 76 percent of Southwest employees said they felt that their job was a calling.

“This level of engagement is no accident,” Weber said. “We hire people who will view their jobs that way.”

In 2015, Southwest Airlines received 300,000 job applications. Only 2.2 percent of those applicants were hired. But those 6,600 people who did make the cut now get to work for a company that truly “luvs” their employees.