Fall Romers Do Their Part for Earthquake Victims 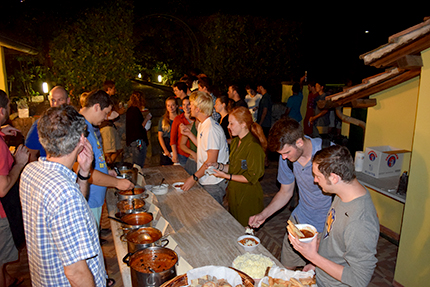 Last week, six days after a magnitude 6.2 earthquake shook a mountainous stretch of central Italy, killing nearly 250 people and leaving hundreds injured, fall 2016 Romers and faculty rallied together to host a chili fundraiser for those most affected by the natural disaster. The “Amatri-chili” fundraiser — named after the town of Amatrice, one of the towns most devastated by the earthquake — raised more than $500. The funds were donated to the Italian branch of Caritas.

Caritas is a Catholic confederation of more than 150 groups dedicated to relief, development and social services worldwide. Following the earthquake, the Italian branch created specialized services for victims who need short, medium and long-term assistance.

“It was an awesome event; the students seemed really excited to be helping such a good cause — and they seemed to really enjoy the chili,” Resident Coordinator Keelin des Rosiers told The University News.

Following the earthquake in Italy, parents and loved ones were understandably worried. For those who need a little help with the geography, Due Santi is located 13.5 miles southeast of Rome and more than 100 miles from Amatrice, the town at the epicenter of the Italian earthquake. While the University of Dallas had announced that all of its students on the Eugene Constantin Campus in Due Santi were safe, hundreds of aftershocks were still felt for hours around the country.

Rome students and staff prepared seven different types of chili for the fundraiser — most notable was Resident Coordinator Michael Pitstick’s “Amatri-chili,” created from the ingredients in the Italian pasta dish Amatriciana, which originated in Amatrice.

Through this fundraising effort, UD’s Eugene Constantin Campus proved that our students and faculty are as dedicated to service and charity as ever. Students felt the urge to help the fellow residents of their temporary country in any way they could, putting the spirit of UD’s mission and community into action.

“It was a heart-warming event on an otherwise ‘chili’ night,” said des Rosiers.