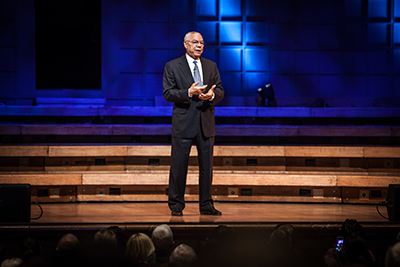 Alumni, students, faculty, staff and friends of the University of Dallas, as well as some of Dallas’ biggest civic leaders and educational advocates, gathered for an evening to hear retired U.S. Gen. Colin Powell, 65th secretary of state, usher Dallas into a cultural shift, urging dedication and continued investment in the future of our children during this year’s Braniff Graduate School of Liberal Arts’ Eugene McDermott Lecture.

Powell lit up the stage with his commanding presence and laid-back demeanor. He shared stories from his tenure as secretary of state and of his own early childhood. He told the story of when he first realized that the future rests with children, which he didn’t come to fully realize until after being relieved of his duties as secretary of state.

There’s no use in trying to change the past, Powell concluded, and education is the key to the future success of our children.

Since his retirement, Powell has campaigned for early childhood education across the country, joining nonprofit and corporate boards, speaking in schools and cities, sharing his stories and vision for our children’s future.

"If you're planning for a lifetime, educate your children," said President Thomas W. Keefe during his introduction to Powell. “It is our greatest hope that these efforts will impact early education and resonate throughout our country and world.”

Following President Keefe's introduction, a short video (see below) from the Braniff Graduate School communicated the school's dedication to the spirited pursuit of a liberal arts education and its mission of cultivating an educational Renaissance for our nation.