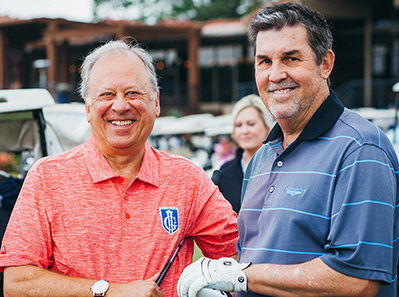 “This was our best year,” said Executive Vice President Bob Galecke. “Never have we had so many enthusiastic players and sponsors out on the green, contributing to the success of the University of Dallas.”

Proceeds from the golf tournament help support the University of Dallas’ Cor Fund. The Cor Fund goes toward the education of students, faculty research and development, and programming and services to enhance student well-being and success at the university.

One-hundred thirty-three players, including alumni, current and former board members and Dallas/Fort Worth Catholic leadership, played in this year’s Galecke Open. Bob Galecke and the first-ever celebrity guest, ESPN TV and radio personality Tim Cowlishaw, teed off at the first hole, along with University of Dallas President Thomas Keefe, to start the tournament Monday morning.

Among the tournament’s 74 sponsors were Naming Sponsor Dan Flaherty with Varidesk and Presenting Sponsors CHRISTUS Health and Aramark.

Galecke started the annual golf tournament in 2001. This year it was renamed the Galecke Open in his honor, and he was made an honorary chairman of the tournament. Last year, the event was North Texas’ 14th largest charity golf tournament in terms of funds raised.

Galecke has served the University of Dallas in a variety of leadership roles for over 20 years. Most notably, his positions at the university have included interim president (twice), senior vice president and executive vice president. He currently serves as the president's senior adviser.

Photo caption: The Galecke Open tees off at the first hole of the Las Colinas Country Club Monday, April 11. Executive Vice President for the University of Dallas, Bob Galecke (left), and first-ever celebrity guest Tim Cowlishaw (right), kick off this year’s annual golf tournament, which helped raise more than $240,000 for the university and its students. PHOTO/JUSTIN SCHWARTZ