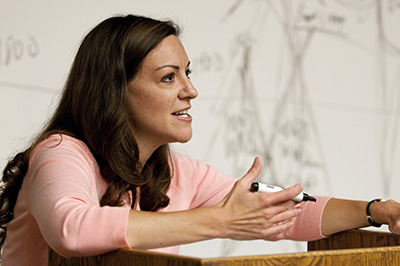 “It just seems incredible that anyone watching yesterday’s video of the Minnesota shooting, how it affected a little girl in the backseat of a car, could turn around and think an appropriate response would be randomly killing five more people. It’s just horrifying,” said Associate Professor of History Susan Hanssen in an interview with Britain’s Sky News 18 hours after the shooting of Dallas police officers on Thursday, July 7, which began with a peaceful #BlackLivesMatter protest downtown.

According to Hanssen, the growing radicalization of the movement was likely the culprit of this tragedy.

“Although the protest was peaceful, ‘black power’ is intimidating,” she said. “The raised fist, for example — people must think of the history of this gesture.”

She agreed that the movement is generally peaceful at a local level and certainly not advocating violence, but people must beware of being drawn into a larger movement of which they possibly don’t know all of the intents and purposes.

“People who are working alone are nevertheless inspired by some of the divisive language: the black versus white language, the class versus class language they’re picking up online,” she said. “There has to be some kind of accountability for the kind of language and symbols being used on the internet.”

Hanssen referred back to Martin Luther King Jr. and his movement, the power of which was found in his patriotism and Christian universalism.

“He brought together blacks and whites, evangelicals, Catholics, Jews,” she said. “I know my own Polish grandfather and my Irish great-uncle marched the streets of Chicago with him in the 1960s. We were very proud of that as part of our family heritage. To create a civil rights movement that is broad-based and doesn’t have that kind of divisive language and intimidating tactics is something that we need to get back to. Martin Luther King was always looking back to the American founders, the American founding ideals, so he inspired patriotism in people of all races, and I think that increasingly, it’s getting hard for people to associate with this new movement because of its divisiveness.”

Since the airing of the interview, Hanssen has received numerous emails from people both in the U.S. and abroad. One viewer in France wrote to express agreement with the distinction Hanssen made between the early civil rights movement and the later radicalization into a class versus class and race versus race movement. Another viewer from Chicago particularly agreed with her sense of horror that an attack on a family in one state affecting the life of a small child could be turned into a justification for “doing the same thing to five more families” — those of police officers in another state.

“If I could elaborate at all,” said Hanssen, “I would like to add that the University of Dallas’ list of Core texts includes both Frederick Douglass' ‘Narrative of the Life of a Slave’ and Martin Luther King's ‘Letter from a Birmingham Jail.’ Both Douglass and King call America to return to its founding ideals, to live out the principle that ‘all men are created equal.’ Both authors also make it clear that Christianity helped them to discover their own dignity as children of God, created in the Image of God, capable of reason and freedom. By appealing to Christianity and patriotism, they gathered a united national consensus.”

While we don’t yet have a new Martin Luther King Jr. to “rediscover that uniting ideal and language,” Hanssen believes that the University of Dallas' unique American Studies master’s program, which focuses on understanding the richness of American civilization and our ideals and institutions against the backdrop of Western civilization, is helping to foster that kind of unifying civil rights movement. In the best traditions of Catholic social doctrine, this is precisely what UD should be doing.