How to Nourish Your Body as Well as Your Mind 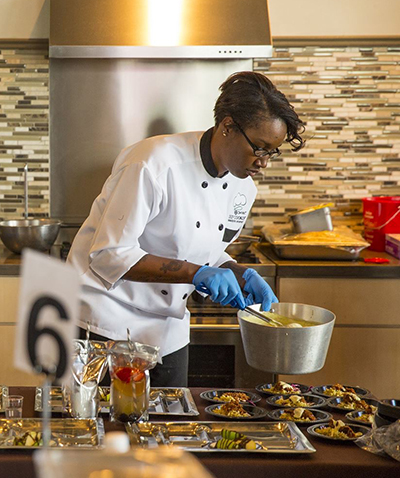 As Aramark’s executive chef in the Haggar Cafe kitchen, Brielle Bustamante always strives to keep our students well-nourished while honing her craft and feeding her passion: she’s known she wanted to be a chef since she was seven years old and has been fulfilling that dream since graduating from the Art Institute of Dallas in 2007. She earned her ProChef Level II certification from The Culinary Institute of America this past summer just before beginning her fifth school year working at UD; this professional development and culinary proficiency program measures core culinary, financial and managerial acumen, including the chef’s skills in dish profile authenticity, flavor development, plating, proper cooking methods, sanitation and use of ingredients.

“It’s a prestigious title to be awarded,” said Bustamante. “Just going through the testing process is very recognized in the culinary world. Being certified is an honor and accomplishment that shows my dedication to my craft and the knowledge of a successful and passionate chef.”

Bustamante knows very well what it’s like, as a student, to try to grab an extra 10 or 15 minutes of sleep or cram in a few more minutes of studying for that exam — but she urges students to make time to eat, too!

“I love that we have the ‘Healthy Corner’ station,” said Bustamante. “It’s the best. Fruit, hard-boiled eggs, hummus, carrot and celery sticks, grapefruit and salsa: all the things that make for a great and healthy snack to get you through until you have time to sit down for an actual meal.”

Gluten-intolerant herself, Bustamante also works hard to ensure those with food sensitivities or allergies can still enjoy the foods they most like to eat.

“Dietary needs are a huge part of cooking for me,” she said. “I know what it’s like to miss out on the things I love to eat. Life is too short to not get your favorite food!”

According to Bustamante, the industry is growing rapidly when it comes to food allergies. For example, food reps are constantly stopping by to give her new samples of gluten-free lines. When she discovers a product that is better than what they already carry, she always tries to make the switch.

“It’s also very important to me to educate my staff on proper substitutions and how to make allergen-friendly foods not taste like anything is missing,” she said. “I love seeing the look on people’s faces when you say, ‘Hey, we have an amazing cookie that’s egg-, dairy- and gluten-free — and it tastes real!’”

As far as nut-free options go, Bustamante has not found that too difficult to navigate.

“Sesame seeds and sunflower seeds make a great substitution for the nuttiness,” she said.

Additionally, if you’re a comic book fan and ever need to unwind by discussing Martian Manhunter instead of Odysseus, Bustamante is always happy to chat with you about anything comic-related, including why DC is so much better than Marvel (except, unfortunately, for the movies).

“The storylines have more depth, and they aren’t afraid to truly surprise and shock the fans, which I think is awesome,” she said.

Harley Quinn is her favorite character; she and her husband and son love to dress up and go to comic conventions. When she competed on an episode of the Food Network’s Cooks vs. Cons — an experience she described as exciting, fun and not at all tiring in spite of the 15 hours it took to film — the producers zeroed in on the comic-loving part of her background, which Bustamante indicated might be significant for her future in television.

“Technically I can’t go into it, but I can say there might be more in the works for me with the network,” she said.

And although being on Cooks vs. Cons kept her “smiling from ear to ear the whole day,” she seems to truly love sharing her culinary skills with the UD community as well, making sure that bodies as well as minds are well-nourished so that we may all best pursue our passions.