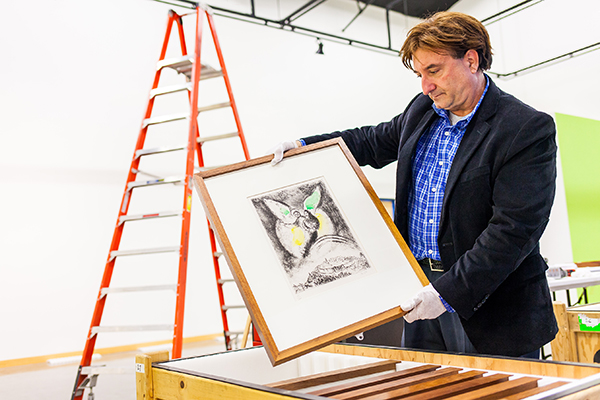 UD’s Beatrice M. Haggerty Gallery is hosting “Marc Chagall: Intersecting Traditions,” a collection of original hand-colored, religious-themed etchings by world-renowned Jewish artist Marc Chagall (1887-1985). The masterpieces will be on display Feb. 4-April 22, 2016, and the exhibit is free and open to the general public.

“Intersecting Traditions” features 50 selected etchings from “The Bible” series, which depicts scenes from the Old Testament books of Genesis, Exodus, Numbers, Deuteronomy, Joshua, Judges, Samuel, Kings, Isaiah, Jeremiah, Lamentations and Ezekiel. The etchings on display at UD will tell familiar Bible stories such as the fall of Adam and Eve, Moses and the burning bush, Jacob’s ladder, Noah’s ark and Abraham’s sacrifice of his son, Isaac.

“Marc Chagall is widely considered to be the quintessential Jewish artist of the 20th century, and hosting an exhibit of this caliber elevates the art program at the University of Dallas to an entirely new level,” said Scott Peck, director of the Beatrice M. Haggerty Gallery. “These etchings remain relevant today because they portray Old Testament stories in a way that humanizes them. Chagall’s work is simply timeless, and we are proud to make it available to our students and the community.”

Chagall created “The Bible” series over a 25-year period. He was originally asked to begin the series in 1931 by Ambroise Vollard, a Parisian art dealer and publisher who had previously commissioned Chagall to illustrate Nicolai Gogol’s “Dead Souls” and Jean de La Fontaine’s “Fables.” In preparation for the project, Chagall traveled to Palestine and completely immersed himself in the history of the Jews. He also went to great lengths to study extreme examples of religious paintings by artists such as Rembrandt and El Greco, and then used these experiences and studies to humanize the images he created for “The Bible.”

By 1939, Chagall had completed 66 of the etching plates. However, the series came to a halt when Vollard died and, one year later, Chagall was briefly imprisoned by the French Vichy regime. He escaped to New York until the end of the war, then returned to France in 1948. Four years later, Chagall resumed “The Bible” project and completed the series in 1957.

Through his creation of “The Bible,” Chagall synthesized elements from diverse cultural and artistic traditions. A similar concept is being embraced by University of Dallas as the Catholic school works to strengthen its ties with different religious and cultural organizations across North Texas. Earlier this year, UD partnered with the Catholic Diocese of Dallas and representatives from the North Texas Jewish community to commemorate the 50th anniversary of Nostra Aetate, a Vatican declaration acknowledging the willingness of the Catholic Church to work toward mutual understanding and benefits with Hindus, Buddhists, Muslims, Jews and other religions.

“In the spirit of Nostra Aetate, the University of Dallas welcomes North Texans of all backgrounds to enjoy this impressive Chagall exhibit,” said University of Dallas President Thomas W. Keefe. “The stories told in these etchings do not solely belong to Christianity. They are part of our shared history with the Jewish community, and the subjects are equally respected by other world religions. I cannot think of a better way to build on Nostra Aetate than by offering this particular exhibit.”

“The Bible” series, including the etchings featured in “Intersecting Traditions,” are part of the permanent collection of the Haggerty Museum of Art at Marquette University. More than 50 of the collection’s 105 etchings have been loaned to UD for this exhibit.

An exhibition catalogue, which includes a complete portfolio of “The Bible” etchings and scholarly essays, will be available. The catalogue is made possible by the Haggerty Museum of Art at Marquette University.
In conjunction with the exhibit, UD will host special presentations and printmaking demonstrations. Guest speakers will include Chagall scholars such as Larry Silver, David Lyle Jeffery and Lyle Novinski. More details about the special events associated with “Marc Chagall: Intersecting Traditions” are available at udallas.edu/chagall.