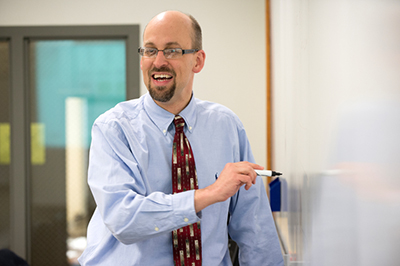 The Powerball lottery, with its record $1.5 billion jackpot, was on many people’s minds Wednesday, Jan. 13. NBC 5 Dallas/Fort Worth asked Assistant Professor of Mathematics David Andrews, BS ’90, to clarify the odds.

Shuffling a deck of cards, Andrews laid out a poker hand containing four queens. He explained that the chances of this happening even once were astronomical; he’d stacked the deck to get that result just one time.

Winning Powerball, then, would be like drawing four of a kind, shuffling the deck, and immediately drawing a second hand with four of a kind.

“Even one is really unusual,” said Andrews. “It’s not that it never happens -- but very rarely.”

Andrews said he wasn’t surprised that no one won the Powerball drawing on Saturday, Jan. 9; even with 440 million tickets sold, there had still been a one-in-four chance that no one would hold a winning ticket.

For the drawing Jan. 13, however, Andrews thought there was about a 95 percent chance that somebody would win. Sure enough, three tickets -- sold in California, Florida and Tennessee -- matched all six numbers. Four tickets in Texas (two in North Texas) matched five numbers, which is worth $1 million.

“The fact that there was more than one winner isn’t surprising,” said Andrews. “With as many tickets as were bought, the chance that a jackpot was going to be shared was pretty high, approximately 72 percent.”

Around 635 million tickets were bought for the drawing on Jan. 13, compared to 440 million tickets for Jan. 9 and 176 for Jan. 6. There had been 19 consecutive Powerball drawings with no winner, which was how the jackpot had gotten so high.

Andrews explained that Powerball had changed the game in October in the anticipation that the jackpot would get to 1 billion; it only took three months.

“In the future, it’s likely there will be another big jackpot,” said Andrews. “This first time was a big deal.”