Meet the Class of 2020: Legacy Student Carries on the Tradition 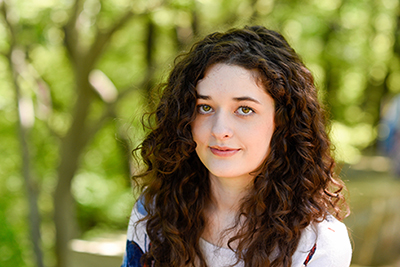 Annie Irlbeck, incoming member of the Class of 2020, and her sister Mary were both born in Rome and lived on the Eugene Constantin Campus (affectionately known by many UDers as Due Santi) until she was a year old. Both of her parents worked on the Rome campus; both, as well as four of her aunts and uncles, are UD alumni.

Growing up listening to her parents’ stories both of their time in college and their years working in Italy, UD has always been such a part of her life that it never occurred to Irlbeck until she started high school that she might go anywhere else for college, and even then she was pretty sure she wanted to come to UD.

“UD has always been part of the family,” said Irlbeck.

Irlbeck’s decision to come here was solidified last summer, when she participated in UD’s Shakespeare in Italy program.

“After that, I knew UD was definitely the place I wanted to be,” said Irlbeck. “The whole experience was amazing. The professors were fantastic, the classes were the best I've ever taken, and Italy itself was absolutely gorgeous!”

Irlbeck is not entirely sure yet what she wants to major in, but if she had to pick now, she would probably choose English. She has also been very involved in drama and theater for years, having been the stage manager of “As You Like It,” “Cinderella,” “Arsenic and Old Lace,” “The Tempest” and “Much Ado About Nothing,” as well as playing Bianca in “The Taming of the Shrew” and Hermia in “A Midsummer Night’s Dream.” She has also taken various choir and music classes in addition to swing and ballroom dancing; she will obviously fit in quite well here at UD!

“I’ve loved my time in drama and might participate in that through college,” said Irlbeck.

Homeschooled from kindergarten on, Irlbeck took several classes in high school from the Our Lady of Fatima Homeschool Co-op, which is run by Julie Dougherty, BA ’84, wife of UD Professor of Politics Richard Dougherty, Ph.D.

“I even had Dr. Dougherty as a teacher for a couple of classes,” Irlbeck said.

Irlbeck might someday want to teach pre-K or kindergarten but is open to other ideas as well. The last couple of years, this second-oldest of eight children has spent most of her time outside of school babysitting, which she loves. She also enjoys reading.

Now that she’s finally coming to UD as a full-fledged student, Irlbeck is looking forward to the classes the most.

“All the classes I've been able to take or to sit in on from UD professors have been absolutely amazing, and I'm really excited to be taking them next year,” said Irlbeck. “Although the idea of college math is frightening.”