Meet the Class of 2020: Musician Aspires to Medical Profession 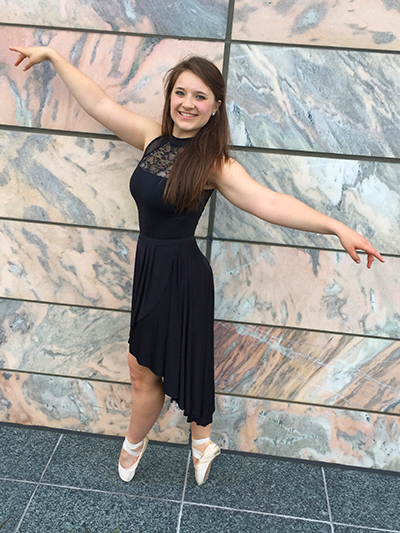 Ever since her cousin Bridget left for UD three years ago, Rose Safranek of the incoming Class of 2020 has wanted to do the same. The aspiring biochemistry major and someday physician was attracted by UD’s exceptional science program, as well as the fact that her older sister and two cousins are students here.

“I realized I couldn’t truly envision myself anywhere but UD,” Safranek said. “I love everything about the University of Dallas!”

Safranek, who has always loved science, took general chemistry at Creighton University in her hometown of Omaha, Nebraska, this past school year, which led to her decision to major in biochemistry. Her father is an infectious disease physician, her mother is a nurse, and several of her aunts and uncles are also in the medical field, so Safranek’s interest in the medical profession is obviously inspired by her family.

“Ideally I would love to have a profession just like my father’s,” said Safranek. “The challenge and responsibility of saving the lives of others and the human interaction Dad enjoys with his patients are all of special interest to me.”

Safranek admitted, however, that she’s also passionate about philosophy and literature.

“I’m sure I’ll grow to appreciate them even more at UD,” she said, “so it’s very possible my biochemistry major won’t stand for long!”

As a homeschooled student, Safranek has been able to enjoy a wealth of extracurricular activities, including eight years of classical ballet study and several years of organ and piano lessons; in fact, she held the position of organ scholar at the cathedral in Omaha for two years of high school. Singing, however, is her true passion: she’s been involved in choir or taken private voice lessons almost her entire life and has been a hired cantor and organist at a local parish for Sunday Masses, weddings and funerals in addition to singing annually in local productions of Handel’s “Messiah” since seventh grade.

Safranek has performed in two musicals, “Joseph and the Amazing Technicolor Dreamcoat” and “Hello, Broadway,” as well as held featured roles in four homeschool Shakespeare plays; she’s a self-described “acting devotee.” She’s a Latin and math tutor and teaches piano lessons to several children; she loves to teach and hopes she might be able to put that love to use at UD as a tutor for other students or working in one of the science labs.

As far as activities in which she might engage at UD, Safranek knows that her biochemistry major will take up a good deal of her time, but with whatever’s left over, she might pursue either a music concentration or at the very least participate in music ministry for Masses on campus. She is interested in being part of Drama Department productions as well as the Swing Club. At some point she might also like to get involved in student government or work in the Office of Undergraduate Admissions.

“I guess I’ll just have to wait and see, but I wish I could do everything!” she said.

When she does ever happen to have some downtime, Safranek might be found playing sports and goofing off with her siblings, talking politics and philosophy with her uncles, writing a capella music, reading literature or poetry, jogging or taking a much-needed nap in the sun.

Safranek is looking forward to experiencing the classes and professors at UD and to meeting her fellow students.

“I absolutely love meeting new people, and the education at UD attracts a very special type of person, I think -- one who’s passionate about learning and faith,” she said. “I’m excited to get to know young people so similar to me in such fundamental pursuits.”

“I will not shed a tear as I leave behind Omaha’s harsh winters,” she said.