Meet the Class of 2020: Soon-to-Be Pilot Seeks His Path 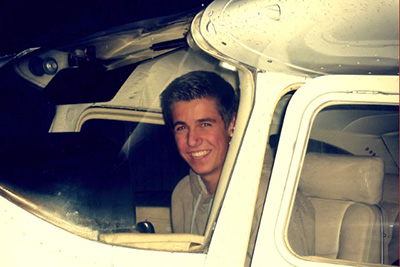 Following in his grandfather’s footsteps, incoming member of the UD Class of 2020 John Paul di Lucca will earn his pilot’s license in April 2016. Di Lucca’s paternal grandfather was a pilot in World War II, passing on a love for aviation to di Lucca’s father and then to di Lucca himself, though he never met his grandfather.

“I started taking flying lessons when I was 15,” di Lucca said. “I stopped for a while but then got a job at an airport and picked it back up again. I love flying.”

He flies a single-engine aircraft; he would have to earn a different type of rating to pilot a larger plane. The farthest he has flown so far is approximately 150 miles or 2.5 hours. He hopes to someday own his own plane and possibly work as a private or charter pilot.

One of the things that drew di Lucca to UD and the Dallas/Fort Worth area from his home in Idaho was the flying opportunities here; however, he is also what we at UD call a “legacy student”: one of his older brothers is an alumnus, and the other graduates this spring; his older sister is a member of the Class of 2018. A family of eight children, the di Luccas are well on their way to becoming a UD dynasty!

“UD is one of the better known truly Catholic schools,” said di Lucca. “Seeing how my brothers and sister have made Catholic friends for life, how they have this fellowship of Catholic friends, was definitely appealing to me.”

He visited UD last year while helping his sister move in at the beginning of her freshman year and enjoyed the experience.

“The students are kind and easy to talk to,” he said. “They talk to you and ask you questions.”

A fan of big cities, di Lucca appreciates the Dallas/Fort Worth area. His major is currently undecided and his interests varied. He may follow his brothers’ examples and major in business; he may lean toward the sciences, especially physics. He also has an interest in politics and would love to someday be a senator or congressman; clearly, UD and the Core curriculum will provide the perfect environment for him to figure out what his path might be.

Di Lucca is the recipient of the Congressional Award Medal for young Americans, which is based on the achievement of goals in four areas: volunteer public service, personal development, physical fitness and expedition/exploration. He enjoys hiking and skiing and loves all sports; he played some football in high school.

At UD, di Lucca is looking forward to meeting new people and going to Rome, of course, but he’s also excited about learning.

“I want to learn more and expand upon everything I’ve learned so far,” he said.