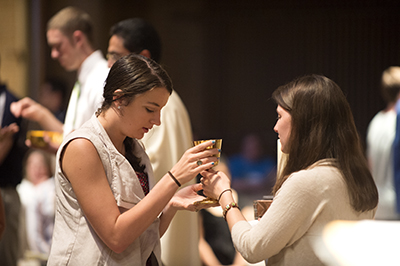 “Thanksgiving is undoubtedly my favorite holiday,” said McGill. “My wife and I always celebrate Thanksgiving with the same group of people — this will be our 36th consecutive year, because we started in 1980 — so the day has a lot of fond memories for me.”

Though Thanksgiving is a secular holiday, McGill notes that Thanksgiving shares more with Catholicism than simply the importance of gratitude.

“I’ve always thought of Thanksgiving as a kind of secular version of the Eucharist,” said McGill. “On Thanksgiving, people spend a good amount of time before they eat catching up and sharing stories, which is exactly what the Liturgy of the Word is at Mass. It’s our broad story that unites us as a people. Then at a traditional Thanksgiving, we sit down and eat a meal that is special and symbolic. That secular Thanksgiving parallels in many interesting ways the sacred Thanksgiving, which is the Eucharist.”

McGill noted that the similarities of Thanksgiving and the Eucharist do not stop there. Indeed, he brought to light a similarity that is deeply rooted, etymologically speaking.

“The word ‘Eucharist’ means ‘thanksgiving’ and is the heart of our sacramental celebration where we offer in a formal way our communal thanksgiving to God,” he said. “The word is extremely meaningful because it is rooted in that fundamental response to the action of God in our lives, to deliver us, to heal us, to forgive us.”

When asked if there were any passages from Scripture that came to mind when he thought of Thanksgiving, McGill was by no means at a loss, listing several instances.

“Moses and Miriam in the Old Testament,” he said. “Hannah’s prayer in First Samuel at the birth of her son, Samuel. The Canticle of Zechariah. The major theme of many of the psalms is thanksgiving. Mary’s Magnificat is in some ways a prayer of gratitude.”

Though American Thanksgiving only has its roots as far back as the pilgrims and just became a federal holiday in 1863, the tradition of giving thanks is deeply rooted in Christian scripture and tradition.

“You see it in the dispositions of the people who encounter Jesus in the Gospels,” McGill said. “People who are healed or touched by Jesus respond in a manner that is motivated by gratitude even if thanksgiving isn’t explicitly described. It’s a basic biblical response to the graciousness of God’s mercy.”

How does American Thanksgiving wed the sacred with the secular? Through the parallels of speaking and eating, of gratitude and sharing. Though a secular holiday, Thanksgiving has maintained an aura of virtue, free of the over-commercialization that other holidays suffer.

“Thanksgiving is largely untainted by commercial or other kinds of ‘barnacles,’” McGill said. “It’s a pure, straightforward day where people get together, spend time sharing stories, and then eat a symbolic meal. All of that reinforces at a very basic level — arguably even the sacramental level — a sense of communion with other people.”