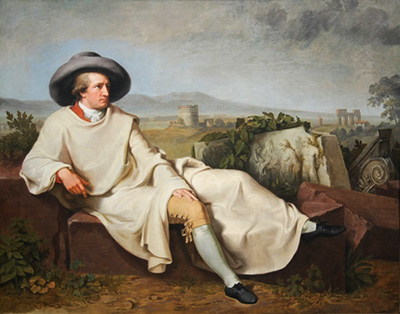 The Department of Modern Languages will co-sponsor a Goethe Symposium to be held Friday, April 22, 2016, in commemoration of the 50th anniversary of the Dallas Goethe Center, an educational and cultural arts organization founded in 1965 to foster an appreciation of German art, drama, language, literature and history as well as cultivate cross-cultural dialogue.

The symposium honoring the German writer, poet, artist, scientist, statesman and philosopher Johann Wolfgang von Goethe will begin at 9 a.m. in Gorman Lecture Center; the panels go until 5 p.m. At 5:30 p.m., there will be a reception and recital in upstairs Haggar featuring soprano Mary Fougerousse, BA ’15, and Choir Director Brian Bentley on piano; they will perform works by Beethoven, Fanny and Felix Mendelssohn, Mozart, Schubert and Schumann, which are musical settings for Goethe’s poems. To wrap up the event, at 6:45 p.m., there will be a film screening of “Young Goethe in Love.”

“Aside from marking the occasion of 50 years of the Dallas Goethe Center and its promotion of German Culture and U.S./German relations, we also hope to offer guests a rich look at the classical tradition that Goethe so nobly embodies,” said Associate Professor and Department Chairman of Modern Languages Ivan Eidt, Ph.D. “Goethe would have loved UD’s Core curriculum.”

The motto for the symposium is “Language Culture, Dialogue.” Panelists will include several UD faculty members as well as faculty from other institutions both in the U.S. and overseas.

Additionally, on Thursday, April 21, the evening prior to the symposium, there will be a reception at the home of former Goethe Center President Robert Clark, honoring Goethe Center donors and long-time supporters as well as symposium panelists. Attendees will include UD President Thomas W. Keefe, Provost C.W. Eaker and Dean of Constantin College of Liberal Arts Jonathan J. Sanford, in addition to representatives of the German government and other area universities.

At this reception, Goethe Center President Nicola Bremer will present UD English/German double major Mary Rose White, BA ’17, with a scholarship to study at UD’s newest sister institution, the Catholic University of Eichstätt in Bavaria, this summer. This scholarship, made possible by the same donors who are supporting the symposium, will henceforth be awarded annually by the Goethe Center to German students throughout the Dallas/Fort Worth area.

UD’s German Club and the Music Department, especially Director Kristin van Cleve, have also been instrumental in the organization of the event.