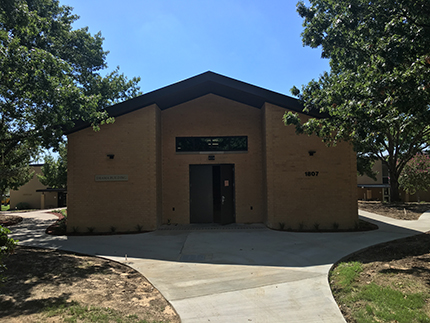 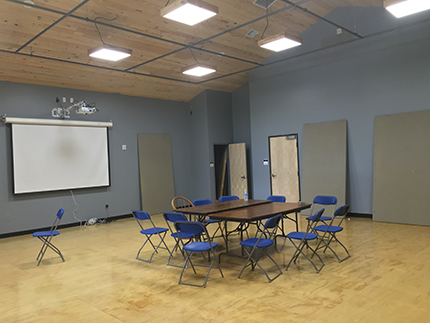 The old wood floor has been replaced with a new one. The ceiling is now vaulted higher to allow for better acoustics and lighting. At a passing glance, to most, nothing appears to have changed; however, if you look a little closer, you’ll realize it’s not the same old Drama Building (and before that the Thomas Aquinas Chapel), but, rather, a whole new building.

The University of Dallas officially completed construction and opened the doors to the new Drama Building, which stands on the west side of campus between Anselm and Augustine Halls (exactly where the old one stood), at the start of the fall 2016 semester.

After spending the spring 2016 semester in Carpenter Hall, the Drama Department happily claimed the freshly completed building as their new home.

“Walking through the building nearly every day over the summer was very exciting,” said Drama Department Chairman Kyle Lemieux. “Seeing our collective visions come to three-dimensional life literally on top of the site of the former chapel and our old rehearsal space — I feel we’re on strong ground to grow and move forward.”

“The offices and rehearsal space feel bright and airy. The custom lighting is gorgeous,” said Lemieux. “The building has strong potential terroir, and it's now our job to fill it with story and memory.”

The new building's combination of history, growth and potential will bring the Drama Building into its next chapter in UD’s history much like the combination of soil, climate and sunlight give each grape their own distinctive taste.

“Providing our students with a space to make brave creative leaps was the goal in designing the new Drama Building,” said Lemieux. “My hope and goal for our new rehearsal room is that we can provide a literal space to match our students’ ambitions and creative visions.”

The next time you’re walking by, take a closer look at the new Drama Building, and see if you can tell what’s changed.

Upgrades include a higher ceiling, more rehearsal space, increased storage facilities, a projector and an ADA restroom. Inside the building, with upgrades to the light and sound systems, the new Drama Building is production-ready for performances, a far cry from the old building that previously stood in its place.

Against the backdrop of a picture perfect day, students, faculty and staff gathered on the mall in front of the Haggerty Science Center to pay tribute to veterans who have served our country.