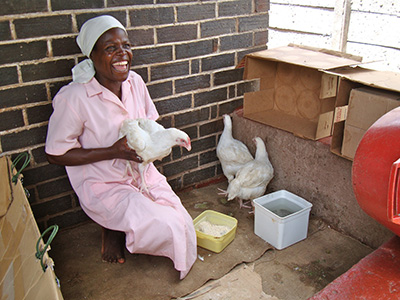 “When we went to dinner, we would take a suitcase full of currency,” said Carolyn (Matzner) Schrader, BA ’65, of her first years volunteering in Zimbabwe. “Nobody saved anything because money was so worthless.”

The south African nation is only now starting to put together its economy after a decade during which inflation rose from 32 percent yearly in 1998 to 11.2 million percent by 2008. In February 2009, the Zimbabwean government adopted U.S. currency in an attempt to stop the hyperinflation.

It was in the midst of this financial climate that Schrader – and Rotary International colleagues in both her local Denver and Zimbabwe – first began helping train women and young men in business and computer skills.

Schrader, who spent her career as an actuary advising employers about retirement benefits and pension plans after majoring in mathematics at UD, first started volunteering in Zimbabwe in 2004. Initially, her area of focus was AIDS awareness, but she quickly realized how much more the locals needed.

“Once you go and see these people and listen to them, you get hooked and you can’t stop,” she said.

In 2009, Rotary International approved a three-and-a-half-year program to train 3,500 women and young men in suburbs of Zimbabwe’s capital, Harare. The participants learned how to price products and document sales as well as basic word processing and spreadsheet functions. The program was so successful that Schrader and her Rotary colleagues are in the midst of a second grant working on expanding those skills.

By now, Schrader estimates that the 6,000 training sessions held by Rotarians have affected 250,000 people in suburban Harare.

“Watching the transformation of the women and young men involved in the project has been the biggest gift to me. I’ve watched them go from being unbelievably poor and feeling powerless to actively embracing what we’re teaching and becoming strong and powerful on their own,” said Schrader.