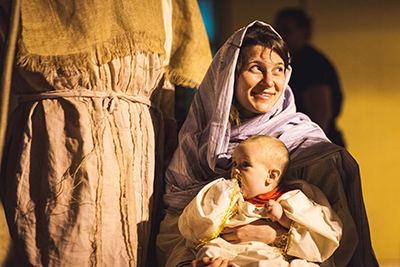 The customs and traditions that surround our Christian feast in celebration of the birth of Jesus Christ are drawn from many sources throughout history, be they pagan, classical, Christian, or otherwise. The traditions, celebrations and images associated with Christmas are many; among the most iconic are the practice of gift-giving, the figure of St. Nicholas and the display of a nativity scene. First and foremost, however, is the date: Dec. 25.

Classics Professor Paolo Asso, Ph.D., explained that an important festival in ancient Rome took place in late December and was a precursor to Christmas celebrations. This festival, Saturnalia, shares two important parallels with the Christian celebration that we know today: the time of year and the tradition of gift-giving.

“The scholarly consensus is that gift-giving originates from a custom associated with the festival of the Saturnalia in the ancient Roman world,” said Asso. “Between Dec. 17 and 23, the ancient Romans celebrated a harvest festival in honor of Saturn, the Roman god of agriculture.”

“The symbolism of the sun triumphing over darkness is very much incorporated into the Church’s celebration of Christmas,” said Esposito. “In the Vatican necropolis, a room contains a second century mosaic that appears to depict Christ as Apollo driving his sun-chariot. Another hypothesis is that Jesus is depicted as the Sol Invictus!”

Saturn and Sol invictus aside, Asso explained the timing of our Christmas celebrations with Biblical evidence.

“Since Catholic doctrine indicates that Jesus was incarnated on March 25, eight days before the Kalends of April, he must have been born nine months later on Dec. 25,” said Asso. “The time of his birth was ‘corrected’ into the time of his conception, synchronizing his birth with the harvest festival.”

However, regardless of the date, Christians did not begin to celebrate Christmas until about the fourth century. Incidentally, one of the strongest modern images of Christianity lived during this time period: St. Nicholas.

Esposito mentioned that St. Nicholas helped to solidify the gift-giving tradition — which the Romans so valued during Saturnalia — within a Christian context.

“The tradition of gift-giving still lingers in our understanding of Santa Claus, which is a condensed and English-ized version of ‘Saint Nikolaus,’” he said. “Various legends are associated with him, but the most beloved one is that he threw three bags of money through a window to allow three daughters of a poor man to have a wedding dowry rather than fall into prostitution.”

The figure of St. Nicholas has become both a spiritual and secular image of Christmas — and is also familiar at the University of Dallas. Professor of History Thomas Jodziewicz, Ph.D., for example, has proudly served as “Santa” for UD Christmas parties for over 25 years.

Another tradition that is cherished at UD is that of the nativity. The wooden figures that grace the lawn in front of the Church of the Incarnation remind us not only of Christ’s birth, but also of one of the most influential saints in Medieval Europe.

As Esposito explained, the idea of a nativity dates back to A.D. 1223, when St. Francis of Assisi constructed a nativity scene with animals and a manger for the Italian town of Greccio.

“The animal lover in him perhaps wanted to express the idea that all of nature has been awaiting its God, and they adore Him at His birth,” explained Esposito.

Jodziewicz described the nativity scene as one of his favorite Christmas images, which enriches the season of Advent in preparation for Christmas.

“I enjoy the ‘tension’ of anticipation as the great day comes closer and closer and the wonderful context of the Advent season for a renewal of prayer and a sacramental life,” Jodziewicz said.

Though the nativity is unquestionably of Christian origin, Esposito noted that there is “ample evidence” to suspect that Christians indeed adapted some pagan religious traditions — such as those of Saturnalia — that we now recognize as belonging to the Christmas season.

“You would have further evidence of Christianity ‘baptizing’ whatever is true or valid or helpful in those pagan traditions and can lead to God,” he said. “This is the idea behind Justin Martyr’s ‘seeds of the Word’ teaching — many philosophers before Christ had partial insights into the truth about God, and the Incarnation of Christ brought the fullness of truth and insight into the mystery of God.”