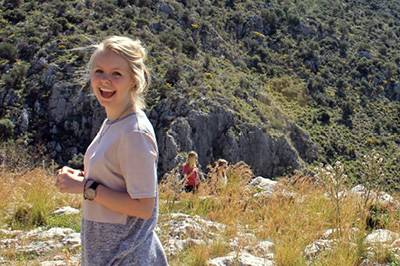 Sarah Webster, BA ’18, wanted to go to a state school with a football team. However, a family friend who happened also to be a UD alumna suggested that she visit UD. In spite of Webster’s resistance, her parents insisted that she give it a try.

“I fell in love the moment I set foot on campus,” said Webster. “I immediately felt so welcomed and wanted.”

A psychology major with a French concentration, Webster is also on the pre-med track; she hopes to go to medical school for pediatric oncology. The experiences of a family she’s known since elementary school influenced her desire to go into this particular field of medicine; their youngest son was diagnosed with cancer four times between the ages of two and 10. Happily, he is now in high school and cancer-free.

“Just watching what they went through made me want to be there to help families through their darkest times,” she said.

Webster loves people and is fascinated by learning what makes them tick — hence the psychology major. She particularly appreciates UD’s Psychology Department’s treatment of the discipline, exploring the person as a whole and viewing an individual’s mental processes not just as confined to the brain but as part of a human being with a soul.

“No matter their background, all people are worthy of good treatment,” Webster said.

She believes that both the psychology program and the Core curriculum in general have helped her not only to grow intellectually but also to become a better person, with the Rome Program playing no small part in this transformation; additionally, she sees how the emphasis on independent thinking will prove crucial both professionally and in personal endeavors. Furthermore, she feels she will be much more well-rounded than if she had decided to only study science.

“I’ve wanted to go into medicine for a long time,” she said, “but I want to be able to talk about things besides science.”

The oldest of four children (one of whom is also currently in college), Webster couldn’t have come to UD without the scholarship she received.

“There’s no way I would be here without that,” she said. “The generosity of alumni and others has helped alleviate some of the burden on my family.”

In addition to participating in both Best Buddies and the Pre-Health Society, Webster works two jobs on campus, both as a student ambassador in the Office of Undergraduate Admission and as an intern in the Office of Advancement’s call center.

“I’ve worked in the call center since I was a freshman — being able to bring in some of these donations is very rewarding,” she said. “Some of these alumni are supporting a family on one teacher’s salary — they might have six kids and one on the way, but they still find a way to give. I think that says a lot about the UD culture.”