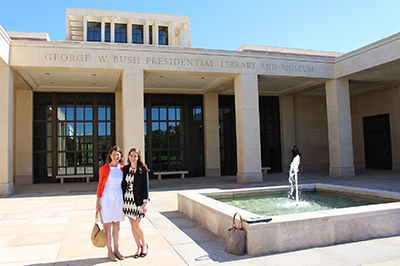 Rising senior Rachel Parkey, BA ’17, never imagined how laborious and tedious a task it would be sifting through presidential archives for her internship with the George W. Bush Presidential Library and Museum. She estimates she spent half her semester inside the presidential library researching for her project. An endless amount of caffeine from the Cap Bar fueled her archival exploration and paper writing.

This spring, Parkey was part of a lectureship internship with the national presidential archival library and museum, where high school and college-age interns enter into a mentoring program for the purpose of researching and presenting.

How do you handle your international diplomacy during a crisis? This question was so much bigger than simply being good neighbors, and Parkey knew it. A history major with an Italian concentration, Parkey was in paradise inside the national presidential archives, exploring an uncharted part of Bush’s presidency.

“Some of my extended family have been involved with the Bush family, so it’s kind of been on my radar,” said Parkey.

Parkey’s aunt worked with President Bush in the White House from 2000-04 as the director of the visitors’ office and went on to help him with his second presidential campaign.

Before Parkey even began working on her presentation in the presidential library, she studied the 9/11 exhibit inside the museum and nearly every paper relating to Bush and his presidency.

“They literally have some of the steel beams from the towers in there...that section of the exhibit in particular is so powerful,” said Parkey. “I kind of jumped off of that and looked into letters, phone calls, stats on official visits from heads of states to the White House, and anything I could get my hands on.”

Parkey knew that she had found a treasure trove for her research.

“This was an opportunity for me to a) learn I was capable of doing something and b) do something I was able to excel at,” said Parkey.

The Core curriculum had taught Parkey all she needed to know about research.

“Rather than just deciding your freshman year you're going to study biology or history, instead of just honing in and focusing on that major, you have the opportunity to explore literature and explore philosophy and really get a good foundation in a lot of different disciplines,” she said. "It develops you as a thinker and as a writer, and it develops you to go on to do projects like these.”

In her research, Parkey came to the conclusion that personal relationships mean everything during a time of turmoil and unrest.

“In my own mind it solidified the importance of focusing on the individual rather than on the bigger picture,” said Parkey.

So much research had already been done over 9/11. So where do I start? Parkey asked herself. “Being able to take a step back and see how important it is to build one-on-one relationships was huge.”

“It was a great opportunity to gain research experience,” said Parkey. “You can’t just go in and kind of make stuff up.”

Now that her internship is complete, Parkey hopes she can further the field of history by continuing her studies in graduate school after she graduates. She wants to focus on international diplomacy.