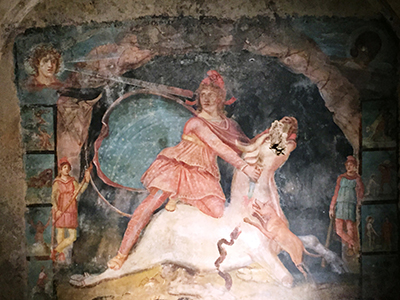 Shrines to Mithraism, one of the main pagan religions of the high and late Roman Empire, can be found throughout the Roman world: under the Church of St. Clemente in Rome, in the ancient port city of Ostia, in the Syrian town of Dura-Europos and, as it happens, in the town of Marino near UD’s Eugene Constantin Campus, where an underground Mithras sanctuary and fresco were discovered in 1962.

The Rome campus’ proximity to one of the most extraordinary monuments of the Mithraic tradition was one incentive to host The Mysteries of Mithras and other Mystic Cults in the Roman World conference there on June 18. UD’s strong alliance with the regional directors of Italy’s National Ministry of Archaeology, the conference’s organizers, also helped.

“The significance of Mithraism sometimes gets lost in general historical accounts of Roman religion from the decline of paganism through the triumph of Christianity,” said Vice President, Dean and Director of the Rome Campus Peter Hatlie, Ph.D. “Such a big conference with such a distinguished panel of speakers will help give this important development in the history of religion the recognition it deserves.”

This was the second time in two years for the University of Dallas to host a major international scholarly conference on the Eugene Constantin Campus. Last year’s conference, held May 15-16, 2016, brought a dozen world experts together to revive scholarship about Ancient Bovillae, a significant city in the suburbs of Rome whose ruins are today found under the Eugene Constantin Campus itself.

Dozens of scholars presented more than 70 papers at this year’s conference, including Elizabeth Robinson, Ph.D., affiliate assistant professor of art on the Rome campus.

"The conference was a great opportunity to meet scholars from all over the world who study mystery religions," said Robinson.

The conference also included exclusive visits to three different sites in the area: the new statue of the Tauroctony found in Tarquinia that is still in the process of being installed in the museum there; the mithraeum at Vulci, with an explanation of its discovery from one of the staff members who excavates at the site; and a private tour of the as-yet-unopen-to-the-public mithraeum in Marino, which should open in September or October 2016.

Robinson also met a doctoral student from the Universidad Carlos III de Madrid who is writing her thesis on the instances of joint worship of Cybele and other gods throughout the Roman world; Robinson was able to provide her with two examples of this worship that she herself has studied that were not yet part of her catalog, and they agreed to keep in touch as Robinson persists in investigating this phenomenon in the area of Italy that she studies.

"Her work supports my hypothesis quite strongly, and I would not have been able to discover her research had I not attended the conference, as she's just beginning her work and has not yet published anything," said Robinson. "The conference proceedings will be published, and I'm currently working on refining my paper and gaining access to three unpublished statuettes that I would like to include in my discussion. I plan to publish my contribution in the proceedings once this further research is complete."