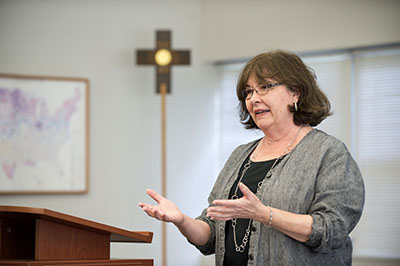 The School of Ministry’s Associate Professor of Pastoral Theology Marti Jewell, D.Min., has been involved with the Association of Graduate Programs in Ministry for more than a decade. Through February 2016, she served as vice president; now, until February 2017, she will serve as president.

As president, she will work closely with other executive committee members to plan the annual meeting and respond to any national issues of interest to the organization, especially those related to lay ecclesial ministry.

“I believe our work as professors preparing graduate students for ministry is so important,” she said, when asked what has led her to become involved in the organization at this level. “We gather and discuss issues common to all of us, and these discussions enrich our teaching.”

Jewell believes that being part of UD’s School of Ministry (SOM) equips her well for this position because of her SOM colleagues, who are dedicated leaders in the field.

“They challenge me every day to be better at what I do,” she said. “Working in the School of Ministry gives me the experiences I need to contribute to my colleagues in the organization.”

She also considers it a mark of the caliber of the SOM that it serves people preparing for ministry across the U.S.

This year, Jewell and her committee will be planning not only the annual meeting but also the 30th anniversary of the organization.

“Our hope is that we can bring it to national attention that this organization exists and has served both the university world and the church for 30 years. We want to celebrate what we’ve been able to accomplish together.”

According to Jewell, Catholic parishes in the U.S. are served by nearly 50,000 lay ecclesial ministers. Just as priests are trained in seminaries to be good pastoral leaders, lay ministers must also be trained.

“We all teach in separate colleges, but by coming together, we become a group with a common mission,” Jewell said. “This allows us to provide this training for lay ministers, and serve the church, in a cohesive way.”