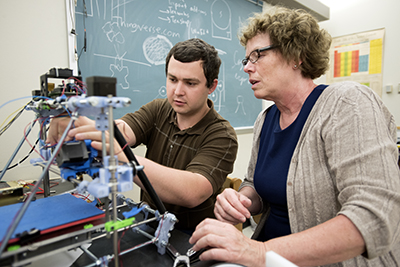 The University of Dallas strives to shape students into global citizens through study of the liberal arts grounded in the Core curriculum. Science and mathematics, often overlooked as liberal arts, are essential to this formation.

“Science in general and physics in particular are important components of the global citizen’s repertoire, as those who make decisions increasingly must be aware of scientific studies, technology and the ethical implications of their choices,” said Professor and Chairwoman of Physics Sally Hicks.

According to Hicks, a liberal arts education should be about more than the acquisition of useful knowledge and skills and the ability to communicate this knowledge. Rather, the ultimate goal of the liberal arts should be to cultivate lifelong learners, who always persist in thirsting for knowledge and, because of the knowledge they’ve gained in the pursuit, are more adaptable to changes in their families, communities, churches, jobs, countries and world.

“Moreover, the understanding of nature at the most fundamental level is truly liberating to the mind of the lifelong learner because it opens up so many pathways to knowledge that are not available to the scientifically illiterate,” said Hicks.

Senior physics major MacKenzie Warrens suggests that the same type of thinking students would use in Core curriculum classes such as “Philosophy and the Ethical Life” or “Understanding the Bible” to make connections between and among disciplines can also be applied in science classes.

Warrens, who did research in UCLA’s physics department this past summer and plans to apply to a doctoral program there in experimental atomic physics for next year, appreciates that the Core curriculum has exposed her to so many different subjects. The advantage for science and mathematics majors in studying the Core as well as for other majors in studying science and mathematics seems to lie largely in the connections to be made among all of the disciplines.

“UD is all about making connections,” said Warrens.

Most UD humanities majors choose to take Basic Ideas in Biology (“Baby Bio”) and astronomy for their required science credits; both of these courses include labs.

“There is a hands-on emphasis,” said Constantin College Dean Jonathan J. Sanford. “A great deal of instructional importance is given to science lab courses. They’re the equivalent of writing-intensive courses — they’re not just about science, but teaching students how to do it. They develop an art, a skill: learning how to run an experiment and engage in the testing of a hypothesis. We’re seeking to cultivate habits of mind, the intellectual virtues proper to that area of inquiry — teaching students to experience the world of nature not just as an abstract idea.”

Further, though, Sanford explained that students majoring in science, technology, engineering and mathematics (STEM) disciplines should not think that by rigorous instruction in one area alone they have become well-educated. Indeed, Warrens says that one of her favorite things about being a physics major at UD is that UD physics majors, unlike many physics majors elsewhere, are able to talk about a lot more than just physics.

“In fact, we try to avoid talking about physics when we’re not doing research, because we have so much else to talk about,” she said. “For example, we can have really intelligent conversations with our philosophy major friends.”

Similarly, humanities students should not overlook mathematics and the sciences.

“We are as teachers not unlike woodcarvers and other craftsmen, shaping hearts and minds and thereby shaping humanity, carving out perfections: each student a living cathedral moving toward encountering truth,” said Sanford. “Not having mathematics and science is like missing an essential feature in that cathedral — the pews, the windows, the floor.”

Additionally, the study of science and mathematics fuels the other disciplines, sparking our curiosity and inspiring us.

“Physics is the study of the smallest through the largest objects of our universe,” said Hicks. “These extremes pique the imagination and our sense of wonder, since who cannot get excited by the idea of a quark or by looking at the planets through a telescope? Great works of literature, poetry, art and even scholarly articles in business and economics are filled with references to these structures and the interactions they undergo. Obviously knowledge of physics plays an important role in the imagination of others in very diverse fields.”

UD adds yet another component to the study of STEM subjects: that of faith.

“UD physics majors, with our study of Platonic, Aristotelian and Thomistic philosophies, know there’s something more out there; we’re not nihilistic like others, but so much more positive,” said Warrens.

“The truths of science and faith converge,” said Sanford. “The same God is the author of both. The path beaten by scientists ultimately leads back to the Creator.”

In short, only a liberal arts education that includes science and mathematics can be considered truly liberal.

“At other schools, there is a division between the sciences and the humanities,” said Sanford. “Not here. In Constantin College, we have a number of different disciplines that are often segregated. We’re standing against this disintegration of the sciences, of everything, into specialized fields; we want to promote a truly universal, comprehensive and liberal education.”