Singing, Teaching His Way into Their Hearts

Singing, Teaching His Way into Their Hearts 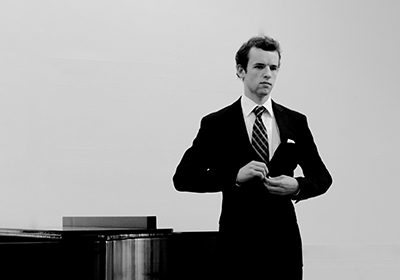 “For those of you who know Anthony, he is a great singer,” said Ivan Eidt. “He apparently sang a solo of ‘Maria durch ein Dornwald ging,’ which he first learned in our German classes at  UD, for the local church, which prompted the interview.”

While at UD, Kersting, a physics major with a German concentration, completed research in observational astronomy, in which he investigated dwarf nova ASASSN-14cv, and participated in lyric theater and Collegium Cantorum. Physics professors Sally Hicks, Ph.D., and Rich Olenick, Ph.D., interested him in physics and astronomy, and Hicks encouraged him to apply for a Fulbright Award.

“The front page article goes on to describe what a wonderful teacher he is (skills he learned in my wife's foreign language pedagogy class),” said Ivan Eidt, “and how much the students and teachers there love him. In a passage that makes us particularly proud, they praise his very good German.”