Student Finds a Voice Among 500 Teens 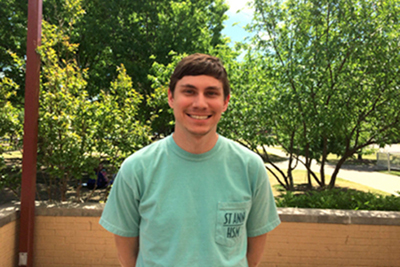 Does standing alone in front of 500 teens sound daunting? Grappling with such an audience as well as with “mind-blowing theological concepts,” as University of Dallas senior Matt Zelinsky describes them, is just a day in the life for Zelinsky.

As part of his capstone project in the pastoral ministry program, Zelinsky has been working as an intern for the youth program at St. Ann’s Catholic Parish in Coppell, Texas.

“I wanted to get experience working in a parish and working with a core team developing talks, retreats and more,” Zelinsky said. “By spending more time in ministry, I’ve been able to get a feel for leading and planning ministry events.”

Zelinsky’s capstone focuses particularly on the weekly Bible study that forms an integral part of St. Ann’s high school ministry program. Zelinsky has become an expert in weaving the Bible into any strand of thought.

Take, for example, the title of his capstone project: “The Family in the Church and Society.” Zelinsky almost immediately draws on his project’s inherent relation to the Bible.

“In Genesis, God said ‘Let us make man in our image,’” Zelinsky said. “He created them male and female. In this way, the family dynamic of love is based on the Trinity itself: God is a family. The father and the son love each other so much that they create Love itself with the Holy Spirit.”

It is this scriptural foundation that Zelinsky has used in his approach to youth ministry and the family.

“I wanted to impress upon teens the diversity of families,” Zelinsky said. “It’s not necessarily all about where you come from -- it’s about what you do with that family dynamic. It’s important to develop real, authentic and genuine friendships and to have support systems that you can lean on. These can be spiritual, too. Jesus had a foster-father on earth. He was not in a ‘typical’ family.”

Prior to this work, Zelinsky had not considered himself gifted in public speaking. Through his experiences during the capstone project, however, he has found and fostered a desire to lead. Where does he start? In conversation.

“St. Paul says ‘pray without ceasing,’ and I really take that to heart. Every day I’ll see little moments where I pray about something, and then that ‘something’ will pop up in conversations later. Those conversations are definitely guided by the Holy Spirit.”

Zelinsky’s work in ministry has been fruitful in many ways. As he nears the close of his senior year, he has accepted a job as the associate director of youth faith formation at St. Michael’s Catholic Church in Houston. He will start his work with this new faith community in July.

"Working on my pastoral ministry capstone project has opened my eyes to truths about myself, the church and the family as it functions within both society and the faith," said Zelinsky.