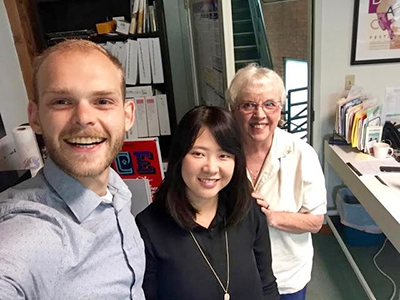 Students arrived back on campus in the days leading up to Aug. 24, when the 2016-17 school year officially began. They returned from summers that were often educational experiences in themselves, filled with internships, research and a vast variety of summer jobs.

For example, Mike Woodrum, BA ’17, a philosophy and economics double major with a classics concentration, had to think on his feet in his ExxonMobil Community Summer Jobs Program internship with the Dance Council of North Texas (DCNT), because shortly after he started, both of his supervisors (and the only full-time employees of the DCNT) left to pursue other opportunities.

“I had to adapt to new situations very quickly and operate with a great deal of independence,” said Woodrum.

The job with which Woodrum had been tasked, consolidating all of the DCNT’s historical constituent data into a single usable file and readying the organization to adopt a single Constituent Relationship Management (CRM) system, required him to develop customizations for Microsoft Dynamics CRM, but neither he nor his fellow intern were familiar with C#, the coding language used by Microsoft Services. Determined to do the job right, Woodrum taught himself the basics using online tutorials.

“This sort of quick-thinking and versatility will certainly serve me well no matter what field I pursue, though I hope to go into law, where such a broad set of skills will have even greater application,” said Woodrum.

Because the internship was through ExxonMobil’s program, he also was able to participate in two professional development seminars as well as a volunteer project to clean up an underprivileged day care in Dallas’ Fair Park area.

“The seminars taught me how to interact with different personality types in the office place (and consequently in life in general),” said Woodrum. “Already I'm applying those skills in the Student Activities and Leadership Center (SALC), where I work with a fantastic group of individuals whose working style is different from my own.”

Then there’s Lizzy Depew, BA ’17, who hails from Pennsylvania but spent her summer in the Eagle-Holy Cross Ranger District at the White River National Forest in Colorado working with the U.S. Forest Service. The business major was able to work with several crews, including the Off-Highway Vehicle Rangers, who patrolled trails on utility task vehicles or UTVs, built new trails and naturalized social trails; the Hanging Lake Crew, who directed traffic, informed visitors about Hanging Lake and patrolled the trail on foot; and the Developed Recreation Crew, who cleaned and upgraded developed campgrounds.

“This experience was extremely beneficial because I’ve been thinking about becoming a forest ranger in the future, and I was able to see what their jobs entail,” said Depew. “I learned a lot about constructing trails and naturalization, as well as about making good contacts with the public. I also got to meet a lot of great rangers and hear about their experiences.”

Meanwhile, Joe Archer, BS ’17, a physics major from St. Louis, headed to the University of Notre Dame to participate in a Research Experience for Undergraduates (REU).

“For those with a physics background, my task was to study a type-II superconductor using a neutron scattering experiment,” said Archer. “In more digestible language: we shot neutrons at a sample which had never had neutrons shot at it before and used the patterns of the deflected neutrons to determine the magnetic properties of the sample in question.”

Because Notre Dame doesn't have a nuclear reactor to produce the neutrons, this involved traveling to Oak Ridge National Laboratory in Tennessee and working with the government's facilities there. The students were working with neutrons that were shot off of a nuclear reactor, then guided roughly half a mile to their specific station. This operation takes approximately $5,000 a day to run, which means they didn't want to miss a single neutron and ran the samples 24 hours a day. The experiment itself lasted about a week, after which the students returned to Notre Dame and worked on processing the data and designing a plastic part to be used in the professor's next experiment in Grenoble, France.

“Having experienced cutting-edge physics research in a national laboratory and lived in a dorm with 24 other physics students from across the country will be an invaluable aid to both my career plan and my resume,” said Archer.

Now back at UD, these seniors are prepared to tackle their final year as undergraduates. However, seniors aren’t the only ones to have had valuable summer experiences. Sophomore Thomas Hogan, BA ’19, worked as a ranger at Philmont Scout Ranch, a 140,171-acre Boy Scouts of America high-adventure camp in northeastern New Mexico. During the summer, Philmont's main program is backpacking through the Sangre de Cristo Range of the Rocky Mountains. Crews of Scouts from across the country as well as abroad come to Philmont.

The Ranger Department, of which Hogan was a part, has about 300 members, with one Ranger assigned to each crew. Hogan’s job was to meet his assigned crew upon their arrival, walk them through Base Camp check-in, and hike with them for their first two full days on the trail, departing on the morning of the fourth day (of a 12-day trek). He was responsible for training them in all Philmont camping procedures: first aid, navigation, water purification, bears, cooking, cleaning, etc. In his approximate 11 weeks at Philmont, he guided out 12 crews.

Hogan, a philosophy and classics double major who suspects his post-UD future will involve some sort of teaching ministry, believes his experience as a Philmont ranger will benefit him in his probable future profession.

“Rangers are really outdoor educators,” said Hogan. “I got a taste of what it means to be a teacher, and how to pay attention to my students: how much I needed to tell them, and how much I could let them figure out on their own.”

He also appreciated the solitude of the trail on his journeys back to Base Camp once he’d left his crews; frequently, he would hike back alone and pray the rosary. In the Catholic chapel at Base Camp, he became the sacristan, setting up for Mass, keeping the boxes of free rosaries and Bibles stocked, making announcements after Mass, and helping clean up afterward.

Hogan, along with Archer, Depew, Woodrum and many other UD students, will carry his summer experiences and memories with him, drawing on the skills and confidence gained through them as he tackles both his next endeavors at UD and whatever lies beyond.