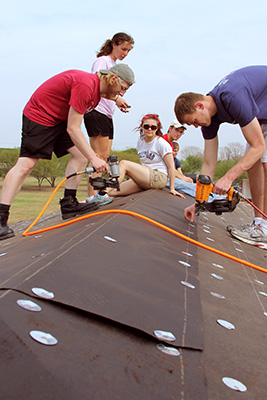 Some students were veterans of the program; others had heard about the amazing experience from friends who’d gone in previous years; and some simply felt called to serve. Whatever initially drew people to Alternative Spring Break (ASB), however, the consensus seems to be that they could not have chosen a better group of people with whom to participate.

This year, 17 students and two campus ministers traveled to McAllen, Texas, located on the Rio Grande across from the Mexican city of Reynosa. They divided their time between helping construct houses on a building site, Proyecto Azteca, and working at a Catholic Charities refugee center that provides single parents and their children with food, clothing, friendly conversation and a place to shower.

“I’ve been on mission trips before,” said biology major Kathleen Miller, BA ’17, “but never before with a group of people who bonded with each other so fast and so well.”

Thomas Hogan, BA ’19 (who will likely double-major in philosophy and classics), concurred: “There was a real sense of working together, collaborating, as a community. Whether we were hanging drywall or wiping down tables, we were doing it as a team, not as individuals.”

For the ASB students, seeing the communities they served was also a rewarding part of the experience.

“McAllen has some of the most impoverished neighborhoods in the U.S.,” said classical philology major Zachary Foust, BA ’17, who also participated in ASB his freshman year. “We expected desolation, but the people were very welcoming and happy to see us; you could tell they liked having us there.”

The group stayed at a Lutheran church, where they also felt very welcomed; after their arrival on the first day, they were given a tour of the border and the neighborhoods or “colonias,” as well as a three-hour information session during which they were apprised of the situation there.

“There are a lot of very rural, unincorporated areas in that county,” said Foust. “They have to maintain their own septic systems. One is located right by a landfill. We didn’t visit those, but some of the houses we were working on will be sent to those places.”

The houses themselves are built by professionals with the assistance of the families who will be residing in them, who are able to get no-interest mortgages in exchange for their labor.

One day, the group served at a St. Vincent de Paul Society soup kitchen. On the last day, the students threw a party for the children in one of the colonias.

As far as their work at the refugee center, they enjoyed talking to the families and getting to know a little of their stories. Foust learned that one family was actually heading to Alabama, where he’s from.

“There’s only so much you can actually do in a week,” said Hogan. “The work was very well-planned; we got to experience different aspects of different types of service.”

“It was wonderful to bond together while serving others,” said Miller.

The chosen Bible verse for the week was John 17:21: “So that they may all be one, as you, Father, are in me and I in you, that they also may be in us, that the world may believe that you sent me.”

“We had a real sense of that,” said Hogan.