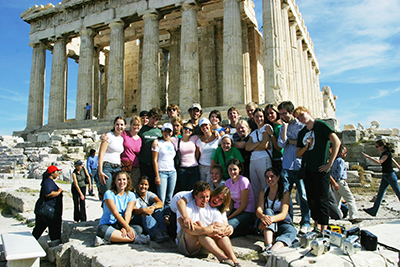 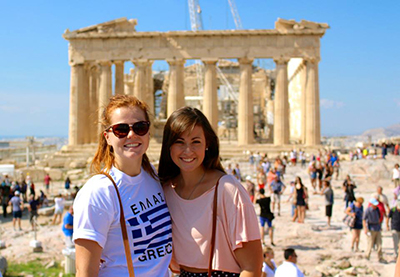 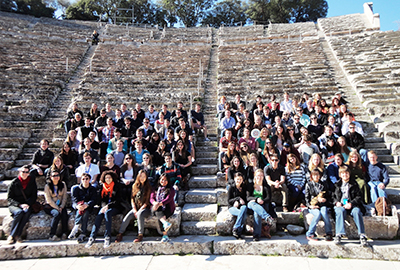 As our Romers return from their traditional 10-day Greece trip as part of our acclaimed sophomore Rome Program, we’re reminded again of the beauty inherent in the “rosy-fingered dawn” of a Greek sunrise — like the ones Homer described in The Odyssey — or the pleasure of eating your first authentic gyro from Athens’ marketplace. Immersed in the history and culture of the western world by visiting more than a dozen cities and historic archaeological sites, Romers are forever changed.

For freshmen or prospective Crusaders who haven’t yet experienced this pilgrimage to the “Cradle of Western Civilization,” here are five captivating sights in Greece, in no particular order, to prepare you and entice you to travel to Greece with UD’s Rome Program.

Among Greece’s most important archaeological sites, Epidauros features the great theater of Epidaurus, the most beautifully preserved theater of the ancient world. With acoustics perfect for reenacting a Greek drama, the amphitheatre of Epidaurus is unlike any other theatrical experience, making this a top destination and sight among Romers.

“It was amazing to physically be in this space, where before we could have only dreamed of what Epidauros looked like,” said fall 2015 Romer Samuel Pate, BA ’18.

“For me, Mount Parnassus is a piece of heaven,” said fall 2011 Romer Vallery Bergez, BA ’14, who spent nearly two years as a residence coordinator at UD’s Due Santi campus after graduation.

Where the Olympic Games were born, and here once vibrant, roaring rivers sustained one of the most influential Greek sanctuaries of the ancient world. Where you can see the Temple of Zeus, inside of which one of the Seven Wonders of Word once stood — the giant gold and ivory statue of Zeus, constructed by the famous Athenian sculptor Phidias. Olympia is one of the 10-day Greece trip’s last and most popular stops.

“The foot race was such an amazing experience because we got to compete against not only our classmates, but also our professors and resident coordinators,” recalled spring 2016 Romer Andrew Gochuico, BA ’18, of racing on the original Olympic track.

The Acropolis of Athens

The Acropolis of Athens — the most famous citadel of ancient Greece — was built over 2,500 years ago on a rocky, steep hill overlooking Athens. Having survived centuries of war, bombardments, earthquakes and harsh weather, the Acropolis of Athens is an architectural marvel of the ancient world. The Parthenon, dedicated to the patron-goddess Athena, has had many uses since its creation: Byzantine Christians converted it into a church; the Ottomans used it as a garrison; and the Latin Duchy of Athens turned it into a cathedral.

“The view of Athens from the Acropolis is absolutely breathtaking and the temples there are so magnificent,” said Gochuico. “One week we were learning about the Parthenon and then a few weeks later we were actually in Athens staring up at the Parthenon.”

The Agora of Athens

A favorite for Romers, and perhaps the most important archaeological site of the Greek capital: the Agora of Athens. It was once the mighty heart of this eternal city, where Greek democracy was first developed and practiced. Politicians gathered, and juries voted. Once surrounded by public buildings and grand temples — dedicated to the Greek gods Zeus, Athena, Apollo and Ares — the Agora of Athens stayed in use for more than 5,000 years.

“The color and the culture and the sheer size of the city, ancient and modern coexisting, was wonderful to witness,” said spring 2001 Romer Callie Ewing, BA ’03.

For those who've already traveled to Greece and experienced the ancient ruins of the Western world with UD’s Rome Program, what are some of your favorite sights? Share your memories on UD’s Facebook and Twitter accounts.