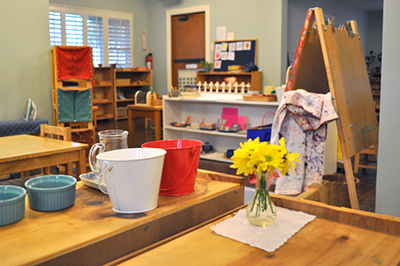 This year, the University of Dallas celebrates its 60th anniversary. In these 60 years, UD has put down roots and grown into this shifting Irving soil in more ways than current students or far-flung alumni often realize: Irving is increasingly populated by alumni, faculty, staff and their families. In various Irving neighborhoods (and Irving is much bigger and more diverse than many students probably realize), in schools, in churches, in other organizations throughout the city: there you will find UD. In a series of “UD in the Community” stories, we will explore these connections.

It took root in a community of friends and neighbors, people who learned from and studied with each other, with the University of Dallas as their common bond. Before its official beginning, what would become St. Francis Montessori consisted of a room in the home of Associate Professor of Theology Christopher Malloy and his wife, Flory, and sometimes in the homes of others, where St. Francis founder and directress Polly (Vaughan) Christensen, MA ’07, would teach the children using the Montessori method while she worked toward establishing the school.

“Hosting Polly's Montessori work in our home was a fun time for me,” said Flory Malloy. “I really enjoyed watching Polly work with the children, and I learned a lot. It was a time of building friendships that I think back on fondly. We mothers all took a turn watching John Christensen, Polly's oldest, who was only months old, while she worked in the classroom with our children.”

Christensen had completed her Association Montessori Internationale (AMI) training as a teacher/guide at the Montessori Institute of North Texas simultaneously with her Master of Arts in English at UD (all while teaching preschool at Faustina Academy, also in Irving).

“There was an amazing group of graduate students who had brunch together every week, did Bible studies, played Ultimate Frisbee together. Polly [and her husband] Joe helped make that community happen, and Polly knew that this was just a part of the wider UD community, including faculty, alumni, etc. who already had their own children and were living in the area,” said Associate Professor of Philosophy Christopher Mirus, who worked closely with the Christensens to get the school started and was on the board for the first couple of years. “So St. Francis Montessori is in a very real way an extension and reflection of that wonderful community among a number of UD grad students, which was made possible because UD was creating community in other ways as well (all the families with young children).”

In 2009, Mirus filed the paperwork to found St. Francis Montessori over the kitchen table of Christensen and her husband, St. Francis co-founder and fellow Braniff alumnus Joe Christensen, MA ’09.

“Both UD and Montessori emphasize the role of the imagination in learning: Montessori through the use of hands-on, visual materials and concrete work, UD through literature, theater, etc. Both have very clear, somewhat unique visions of education that are deeply compatible with the Catholic faith but not limited to Catholics, because they are rooted in an understanding of what it is to be human and of how humans grow and develop. Both have important roles in building strong communities that go beyond current students,” said Mirus; his oldest son participated in St. Francis’ Atrium program before the Miruses moved to Italy, where Mirus now teaches on the Eugene Constantin Campus.

Lara (Simpson) Neri, BA ’96 MA ’01, and her husband, Marc Neri, MH ’08, were the Christensens’ neighbors in the condos across the street from UD; their children have grown up together, and their oldest daughter, Sasha, was one of St. Francis’ original students.

“Polly has gone above and beyond to help our children — and the other children who have been a part of this community — to not only receive an amazing education, but to know deeply that they are loved and created for a divine purpose,” said Lara Neri. “All of our kids have benefited from being a part of St. Francis. Polly is much more than a teacher or a headmistress. I will never find another school that comes anywhere near what this school is to us.”

Polly Christensen was not only a wet nurse to the Neris’ son, who is adopted, after his traumatic birth at 25 weeks’ gestation, but has helped him tremendously in his struggles with dyslexia.

“She was a big part of his ability to grow physically strong and overcome the trials of his birth, and now she continues to be an integral part of his life, helping him to develop strategies to deal with his dyslexia and reminding him daily that he is loved and capable,” said Neri.

In its seven official years, St. Francis Montessori has grown to 42 families, the majority of whom share some connection with UD, whether faculty, staff, alumni or some combination thereof.

“St. Francis is a wonderful example of how UD and the community come together,” said Associate Professor of German and Department of Modern Languages Chairman Ivan Eidt. “It is wonderful to see so many generations of UD students, alumni and faculty intersecting beyond the campus. I personally love to see how what starts at UD blossoms from generation to generation. It is like some fantastic tree with hundreds of branches ever-growing, ever-expanding and by virtue of the same sustenance that first drew us all together in the beginning: a love of learning, God, community and the development of the whole person in a very Catholic way (an imago Dei kind of way).”

“The community from which St. Francis Montessori arose was one of friends: friends gathered around a table discussing how to realize a vision,” said Flory Malloy. “And those individual friendships were certainly strengthened by the intellectual formation provided at the University of Dallas. Likewise, the community that St. Francis Montessori continues to foster is also based on friendships and a common purpose of appreciation for God's world and the child's pace in coming into their own in that world. Polly and Joe have been indispensable in setting the tone for the school in this regard. So many friends have said to me that even as the school grows, it still just feels like family.”

Certainly, UD’s mission and that of St. Francis Montessori seem to align quite well with each other.

“I love the Montessori method and believe it offers a tremendous opportunity for being exposed to beauty and experiencing wonder in the world, which seems to naturally connect it to UD,” said Neri. “It was at UD that I was asked to really think about beauty, and at UD that I came to appreciate and consider wonder. I find many commonalities between realizations I had when I was at UD and truths my children are being introduced to already.”

Even among Montessori schools, though, Neri believes that St. Francis is unique.

“It’s like another child to Polly, and I believe she genuinely loves each child who passes through it,” said Neri. “She is a soul on fire with love, and her passion is changing the lives and helping to form the souls of children who will change the world.”

It seems likely that a good many of these children will someday attend UD.

If you know of another Irving school, church or other organization that we should feature in a future edition of “UD in the Community,” please email Callie Ewing at cewing@udallas.edu.

In the photos: Top photo: In true UD fashion, St. Francis has an annual Oktoberfest festival, complete with German dancers. Photo in body of story: A classroom at St. Francis. Photos courtesy of St. Francis Montessori.