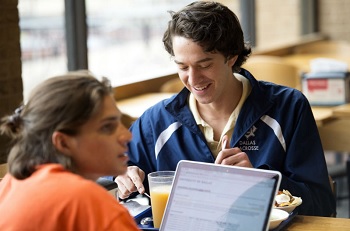 Forbes magazine has included the University of Dallas on its list of the best value colleges for 2016. The list, which was released Tuesday, March 29, identifies the 300 colleges and universities “worth the investment” and is based on tuition costs, school quality, graduation success and post-graduate earnings.

The university is ranked second among colleges and universities in North Texas, sixth in Texas and 176th overall.

“It’s an honor to once again be identified as one of the country’s top universities,” said Executive Vice President for Enrollment and Student Services John Plotts. “To be acknowledged as a best value recognizes our continued efforts to make a quality private education more accessible and affordable.”

The university has been consistently ranked in Forbes’ annual Best Colleges list, which is released each summer. To create this new ranking, Forbes partnered with the Center for College Affordability and Productivity to analyze the criteria of quality, drop-out risk, alumni salaries and skills, and gross tuition and fees.

The full list is available online at www.Forbes.com. A comprehensive list of the university’s rankings is available at udallas.edu/rankings.